“OK,” said R neutrally – having learned a few things over the past 32 years.

“Well….” I said, “Anyway, not if I can get a nice bee, or a butterfly – or maybe a tufted duck when we go to Stratford.”

We did gardening (eeeurgh), and I snapped some bees, but failed to catch up with the Brimstone that zoomed through the garden several times. Then we went to Stratford and had a lovely lunch, but a walk down the river failed to produce any tufted ducks – unsurprisingly, because they’re quite shy, and the river was heaving with people in little motor boats, the hiring out of which seems to be The New Thing on the Avon.

Back at home, we were sitting on the patio drinking tea and enjoying the sunshine, when I suddenly realised that the breeze was coming from….

“Which direction is the wind coming from?”

R took out his phone, pulled up a weather app, checked the wind forecast for the owl field, and said, “I think you’d better go.”

And that, dear reader, is why I married him.

The high Cotswolds were glorious this afternoon: the sun was shining, the birds were singing, the larks were ascending, and for the first time in all my visits I didn’t need a coat, a scarf, boots and gloves. The owls, it has to be said, weren’t especially co-operative, but I had a thoroughly nice time anyway, until rain suddenly stopped play at 7pm. 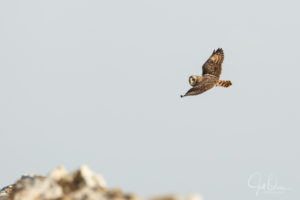 I’ve put an owl as my extra today, and there’s quite a nice fly-past from the same bird on my Facebook page, if you’d care to look; but I can’t resist featuring this Peacock, resting on a lovely old dry stone wall. This species has only one brood per year and hibernates as an adult, so this individual is eight or nine months old, and after somehow surviving the almost apocalyptic weather of the past few months, has emerged from wherever it’s been roosting looking remarkably fresh. If it can find something to eat – not a given, because the weather has held everything back, and there are barely any wild flowers in bloom in this area right now – and avoid predation, it may be able to find a mate and pass on its hardy DNA to a new generation.