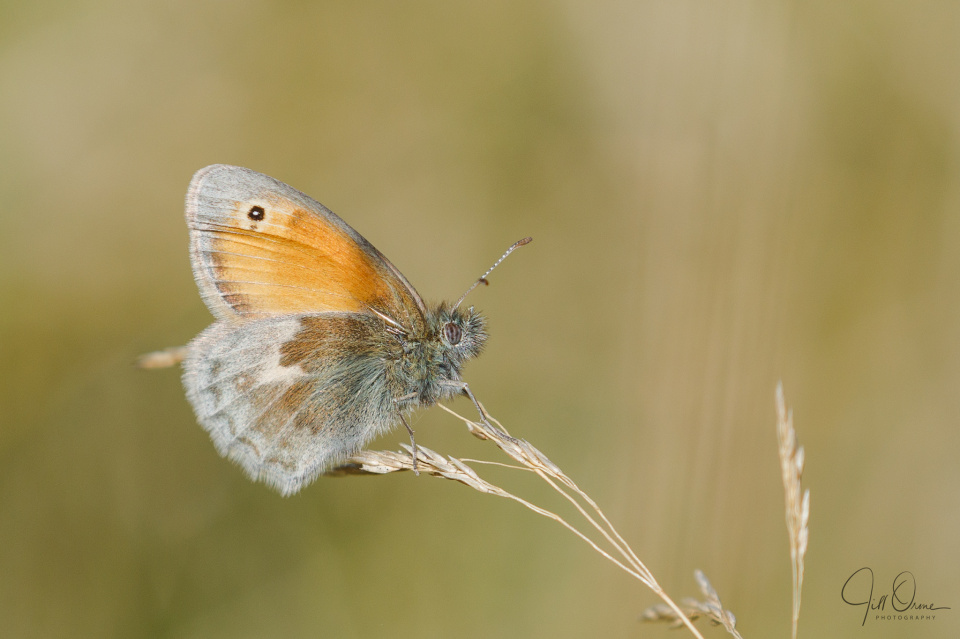 Knowing that it was forecast to be another very hot day, R and I went out early and walked around Charlecote. At this time of year we expect to find numerous grasshoppers pinging around the rides up in West Park, and I went equipped with all the cameras and lenses necessary for taking their photos, but we didn’t see – or hear – a solitary one. Maybe they’re not early risers – I’m not generally an especially early riser myself, so I wouldn’t know.

In compensation for the paucity of Orthoptera, there were several Small Heath butterflies noodling around in the dry grass, bickering with each other, and having tiny fits of the vapours whenever I tried to approach them. This, therefore, was taken with the long lens – and was shot through a gap in quite a lot of intervening grass (which is why there’s a shadow across the wings) – so I’m pleased, and if I’m honest, relieved, that it came out reasonably well. This is a male, whose wingspan comes in at 33mm according to the very reliable UK Butterflies, so he definitely qualifies for Tiny Tuesday.

Today’s were not the first Small Heaths I’ve seen this year, but it’s the first time I’ve ever seen any at Charlecote, so I’m pleased to be able to record them. Although the species is not over-fussy as to where it lives, it’s believed to be in decline due to loss of suitable habitat, and is therefore a Butterfly Conservation high priority species. It’s also listed as a Species of Principal Importance under the Natural Environment and Rural Communities Act 2006, but it’s probably best not to get me started on the subject of the current government’s attitude towards wildlife. I see Small Heaths more often than I would expect, given the official concern about them, and as they are very small and quite hard to spot, I find myself wondering if they might be under-reported, rather than in actual decline. I certainly hope so.