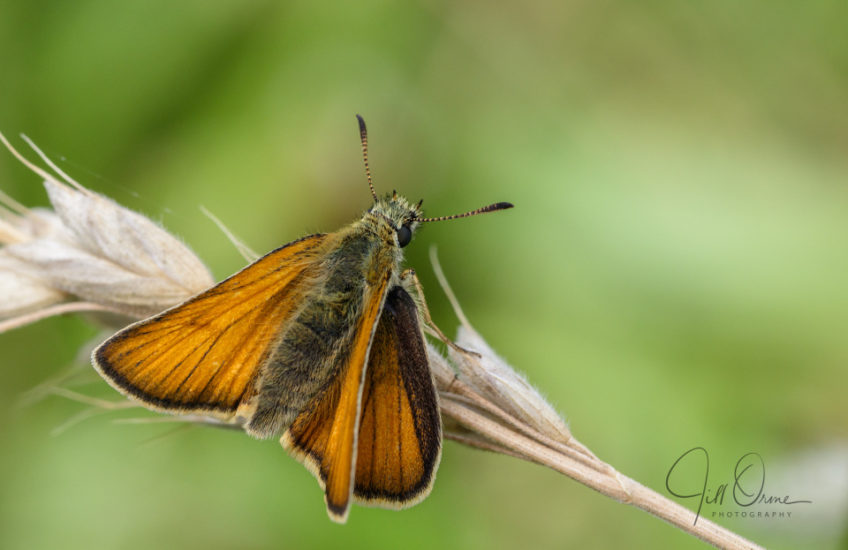 I popped out for a quick photo walk this afternoon, and came home two hours later with a memory card full of shots of interesting insects. I’ve only had time to go through them very quickly this evening, but I’ve picked out two which I think are worth posting.

Essex Skippers and Small Skippers are about the same size, and superficially quite hard to distinguish; the books all say with breezy confidence that the Essex has black tips to its antennae whereas the Small has orange tips, but I find that the antennae of both species are very variable, and often leave me uncertain as to which I’m looking at. The males are fairly easy to tell apart if you can see the upper wing surfaces: they both have a line of scent cells called a sex brand, but in the Essex Skipper this is short and straight, while in the Small it’s longer and slightly crooked – but that wouldn’t help you with this pair, because the main image is of a female, and though the extra shows a male his wing surfaces aren’t visible. 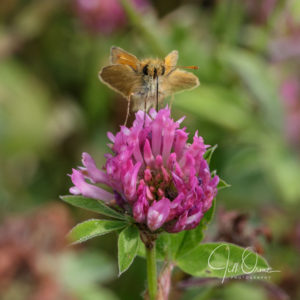 I do in fact have other photos of the little chap in the extra, and some of them show a long, crooked sex brand – which coupled with those neat orange patches on the underside of the ends of his antennae make it pretty straightforward to identify him definitely as a Small Skipper. The female in the main image is harder though because there might just be – is there? or not? – an orange tinge to the very tips of the antennae, and even if it’s not there on the visible surface it could possibly be present on the underside. The thing that finally tips the scales and convinces me that she’s an Essex Skipper rather than a Small is the faint angled mark about two thirds of the way back along her left forewing and running parallel with the hind margin, which I’ve never seen on the wing of a female SS.

Frankly though, I still wouldn’t want to go into court and swear to my identification!