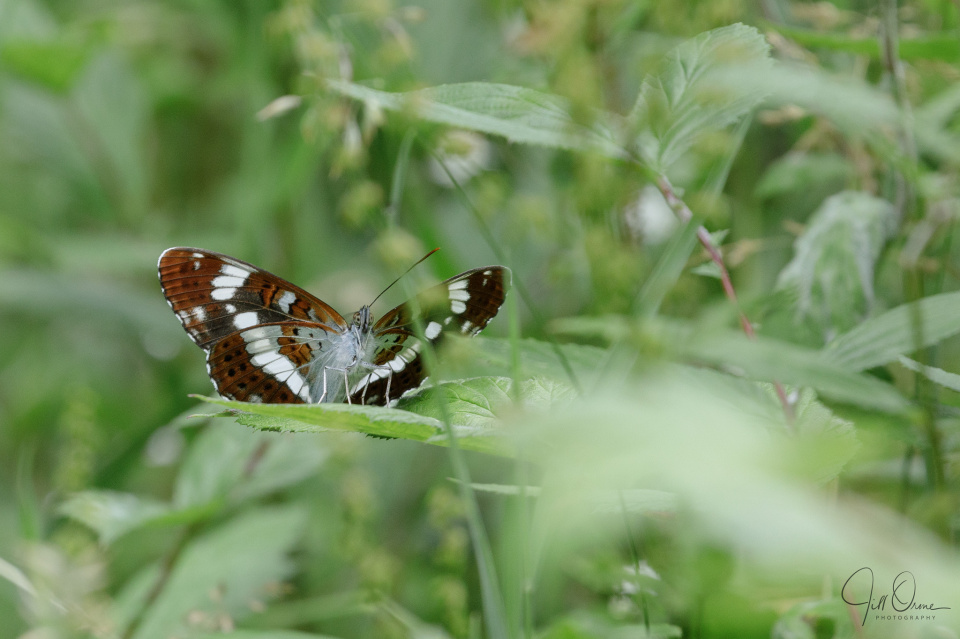 I’m not a big fan of messy images like this – it was intended purely as a record shot – but when I saw it on a big screen it made me smile, because it really caught the White Admiral’s attitude. Looking at its pristine condition I think it must be a pretty fresh one (their preference for bramble nectar tends to reduce their wings to ribbons in short order), and it was behaving in much the same way as I think I probably would if I woke up one morning and discovered I’d sprouted wings: whizzing about all over the place, floating down onto a leaf as if exhausted but leaping off again at the slightest stimulus, finding a flower on which to nectar but then suddenly zooming right up into the trees for no clear reason…. and so on, and so on. I spent quite a while scuttling about, trying to catch up with it in a place where I could get a clear shot, and did finally manage it, but by then both of us were in need of a nice lie-down in a darkened room.

I wasn’t in Oversley Wood to photograph White Admirals this morning, but in search of Purple Emperors, and Purple and White-letter Hairstreaks, all of which have been showing well over the past few days. This morning though…. not so much. The day began overcast and not especially warm, which isn’t conducive to tree-living butterflies being teased down out of their roosts, and I felt quite sorry for the photographers who’d made long journeys to get to the site – for me it’s just a few minutes in the car, and not succeeding today just means that I need to go back on a different morning, but not everyone has that luxury. 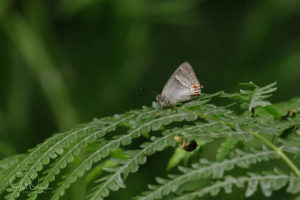 Having said which, it wasn’t a total washout: the extra is a Purple Hairstreak, justifying all the photographer steps and hours being spent on searching the bracken along the paths. On a nice morning PHs will drop down out of the oak trees in which they live and bask on the bracken to warm up (wings open, if you’re lucky, which shows the iridescent purple overwings that give them their common name), but even in overcast weather they can sometimes be found there – this one was spotted by someone else, a long way back from the path and under quite heavy tree cover, but luckily sitting still enough to be photographed, even in poor light.

I also had the buzz of seeing a Purple Emperor, though it didn’t land, and they’re much too fast for a flight shot. My one real disappointment was in not seeing a White-letter Hairstreak; they live in elm trees, which of course is a problem in itself since Dutch Elm Disease decimated our population, but apparently there are enough trees remaining in Oversley Wood to sustain a colony, and I photographed them here a year ago. Today they didn’t show for me even after the sun came out, but I still have the feeling that the season is running a little late, and that I yet have time to catch up with some.

The morning brought two surprises. The first was bumping into JaneW, who was dog-walking with a friend, and said that as soon as she saw all the camera gear approaching, she knew it had to be a blipper! The second was seeing a very fresh male Beautiful Demoiselle: if he’d been reading the same books as me, he’d know that his species relies on fresh running water, and to the best of my knowledge the only water at this site is a rather stagnant and unappealing pond. A mystery to be investigated on another day.