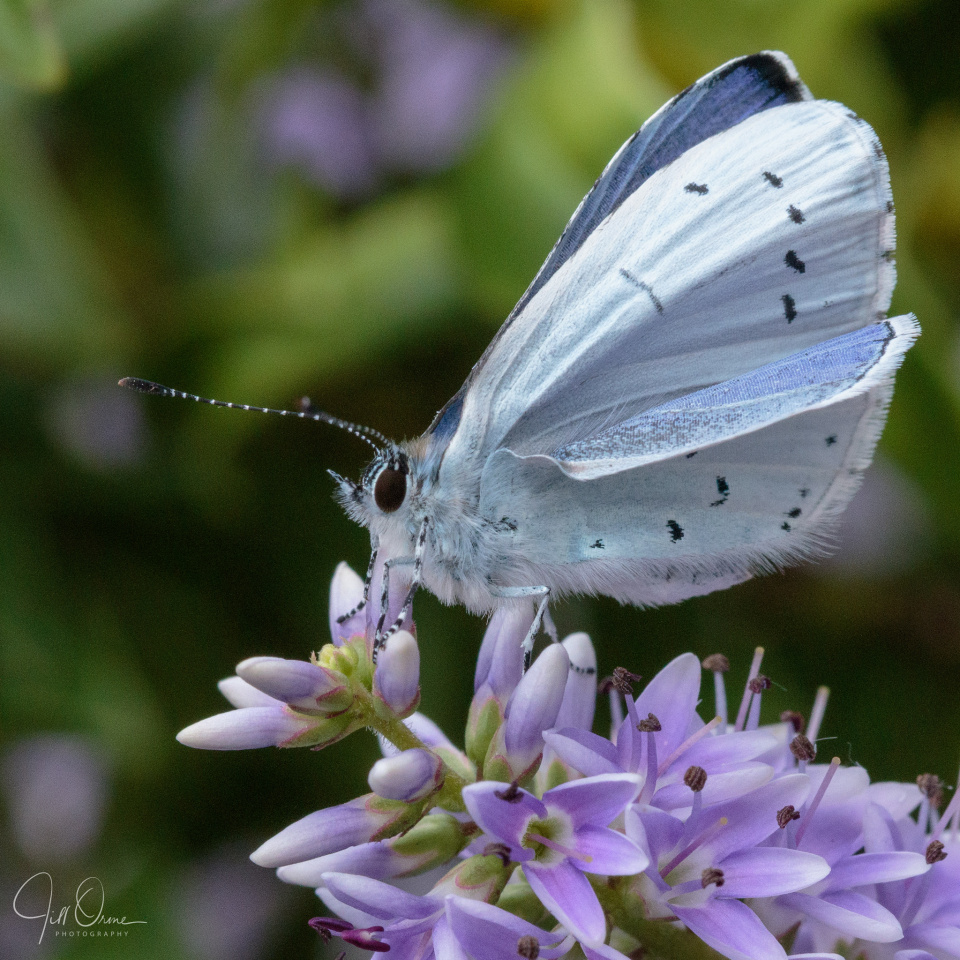 For a month this spring I had several first-brood Holly Blue butterflies in the garden, generally zooming around our huge laurel tree, chasing each other, and courting. My last sighting of one of the females was in Mid-May, when her wings were in shreds, and she’d apparently given up ovipositing on the laurel and on our tall holly, and had moved down to a willow-leaved cotoneaster, about a metre tall, in a bed next to the yard where we park the cars. Today I was walking across the yard to the garage, and as I passed the cotoneaster I met one of her sons.

I was a little worried about him, because he was very obvious against the dark green leaves, and the shrub is a staging post for a lot of small garden birds, as they wait their turn on the feeders we have hanging from a pole in this bed. It’s also fairly badly infested with the web of some kind of moth, which though it’s not as sticky as spider web, is still quite tacky. Because his wings weren’t yet fully inflated, he could only flutter weakly for short distances, and I thought his chances of being predated were quite high. So – sue me – I intervened, and moved him onto this hebe, where he was much less obvious. For the next hour he didn’t move, and his wings showed no sign of sorting themselves out any further; but then the sun came out, it warmed up, and I went out for a walk – and when I arrived back, he’d gone. Maybe into the beak of a house sparrow, but let’s hope not.

On the subject of new things: while I was fussing over the Holly Blue a fresh-looking Hummingbird Hawkmoth shot past me, and began feeding on the perennial sweet pea I’ve tried for years to eradicate (with no success at all), and which is currently strangling a philadelphus in the same bed. Even though I was using the macro and it wouldn’t let me near enough for close-ups, I got some reasonable photos of the new arrival – one of which I’ve posted to Facebook, if you’d care to see it.