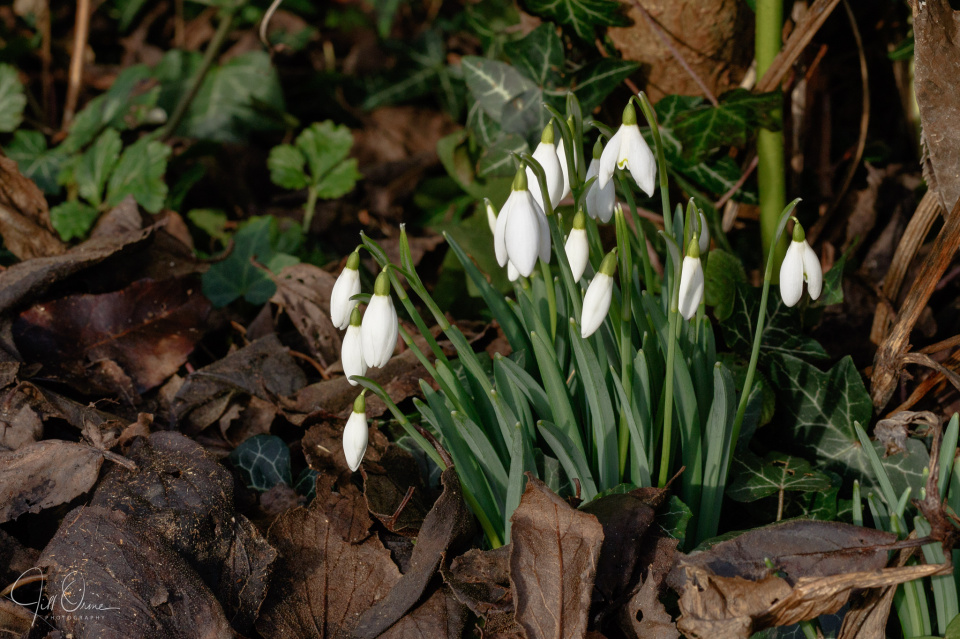 R and I spent quite a bit of time in the garden today: I pruned the rest of the roses in the back garden, and R dug out a lot of bramble. Being former farm land, our entire plot is riddled with bramble and ivy, and we have to wage a constant war of attrition on the stuff, but obviously it’s easier to extract while the soil is as damp and soft as it is at the moment.

While I was working my eye was caught by this nicely lit clump of snowdrops underneath a Viburnum judii in the rose bed, and I thought that they’d make a good subject for a seasonal photo. There’s both ground ivy (Glechoma hederacea) and Hedera helix in this shot, but only the Hedera is condemned to be removed – “ground ivy” isn’t actually ivy at all, but is a kind of dead-nettle, and because insects appreciate its small purple flowers I allow it free rein as a ground cover plant. You can also see a lot of leaf litter here, and that’s a deliberate choice: I leave my borders messy like this over the winter to give protection to hibernating insects, and also to the new shoots of early spring plants, and I won’t be tidying at ground level for another four to six weeks. 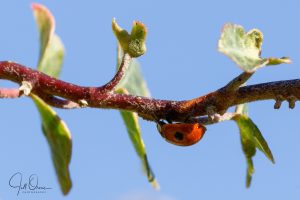 On the subject of hibernating insects, the extra today is a rather unseasonal shot of one that should be, but wasn’t. We generally find a lot of harlequin ladybirds in the house during the winter (though this year there have been very few), but I believe this is the first time I’ve ever found a 2-spot (Adalia bipunctata). It turned up on the trackpad of my Mac late last night, and when it was still there early this morning I realised I’d have to try to rescue it: they shouldn’t be up and about so early in the year when there are very few prey invertebrates around for them to eat, but the house is too warm for hibernation. I could have popped it into some of the leaf litter in the garden, but the recent storm has left that pretty wet, which isn’t ideal with a cold snap forecast, and in the end I decided to place it in the ivy on top of the old farm wall, which is dry, with pockets of deep cover, and where I frequently find ladybirds during the season. I carried it out on a slip of paper, from which it wasn’t keen to be dislodged, but in the end I persuaded it onto this shoot, and managed to get my first invertebrate shots of the year as it trundled along it. Eventually it reached the thick tangle on top of the wall, and disappeared down inside it. I don’t have much hope that it will survive, but I’ve at least given it a chance.