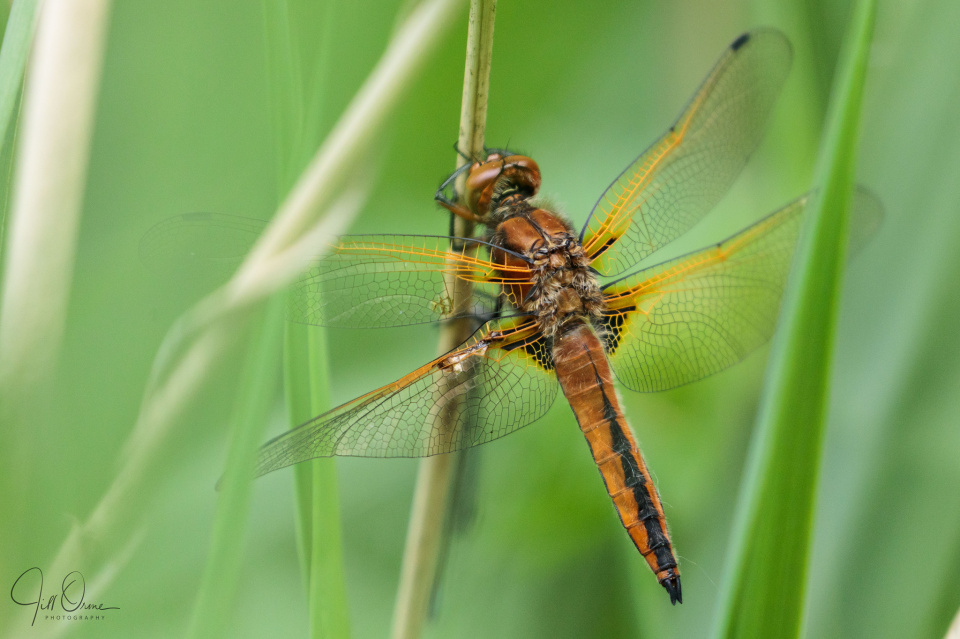 When I woke up this morning I had high hopes for this morning’s dragonfly workshop at Ham Wall with Victoria Hillman – I had, after all, seen a couple of chasers hunting on the reserve yesterday evening. When I walked out of the hotel I saw the pink remnant of a sunrise in the eastern sky – which might have alarmed me, had I been a shepherd – but the cloud was rolling in, and by the time I arrived at the reserve it was darker than it had been when I set out.

Ham Wall is famous, among other things, for having a Four-spotted Chaser roost. These dragons tend to emerge en masse, and for the first couple of weeks, until they become sexually mature and territorial, they roost companionably together at night for safety. At Ham Wall they mostly emerge from a single pond, and for a number of years the roost has predictably been in the reeds to the eastern side of it, where the dragons can catch the early morning sun and warm up to flying speed before there are too many predators up and about. Thus if you were a dragon-fancier, you just had to know when the roost was happening (generally in the last two weeks of May), find someone to tell you exactly where it was, and be prepared to go there shortly after dawn, when you could pick your composition and snap away at the roosting dragons to your heart’s content.

Now though, climate change appears to be disrupting this dramatic wildlife spectacle. Last year March and April were so warm that the roost happened early; I’d originally booked to take the workshop last May, but if it hadn’t been postponed due to CV-19 lockdown, we would have arrived to find that the Four-spotted Chasers had already dispersed to their hunting and breeding territories. This year the opposite has happened: April was so cold, and May has been so cold and wet, that the ponds and lakes at Ham Wall haven’t warmed up enough to trigger the mass Four-spot emergence.

When we reached the roost at about 5.45am there was a single male Four-spotted Chaser hanging on a reed. We dutifully took his photo, and then moved on in search of other subjects. What we found, along a sheltered ride just around the corner from the Four-spot pond, was a mass damselfly roost: there were literally hundreds of damselflies clinging to vegetation – often several individuals to a stem – over a stretch of about fifty metres. I spotted Common Blue, Azure, Variable, Blue-tailed, Red-eyed and Large Red Damselflies all mixed up together in the roost, which I suppose is an indicator that they’re so far down the food chain that almost anything else is more of a threat to them than they are to each other. They certainly perceived us as a threat, and I found it sweetly poignant to see them edging around the back of a leaf or a stem to try to hide from us.

So we found ourselves with an almost limitless choice of subjects. Sadly what we didn’t have was light, and I therefore had to step outside my comfort zone, open the aperture of the macro, and try some selective focus photography. This is Victoria’s speciality, but it very much isn’t mine, and I found it more frustrating than rewarding to be working with such a shallow depth of field. Nonetheless I did get some images that I like, and I’ve put a few of them on my Facebook page, if you’d like to see them. 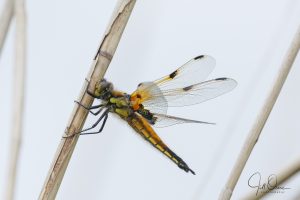 Both of the images here were taken at the end of this morning’s workshop. One of the other participants spotted this Scarce Chaser in amongst the damselflies, and although he was in a very poor position, and by this time the wind had become fierce enough to provide an added challenge as it whipped the vegetation back and forth, I managed to shoot through to him with the long lens. It’s only the second time I’ve captured a male Scarce Chaser as fresh as this, before his thorax darkens and the blue pruinescence develops on his abdomen, so I’m rather pleased with him. The extra was taken as we walked back past the solitary Four-spotted Chaser at the dragon roost site, by which time the wind was so strong that the poor creature was hanging on for dear life, with his wings streaming behind him like pennants. By the end of the morning the wind speed was said to be 40-50mph and it was raining horizontally, which probably didn’t do him much good. After a short and unpleasant visit to Westhay Moor, I spent the rest of the day reading in my hotel room.