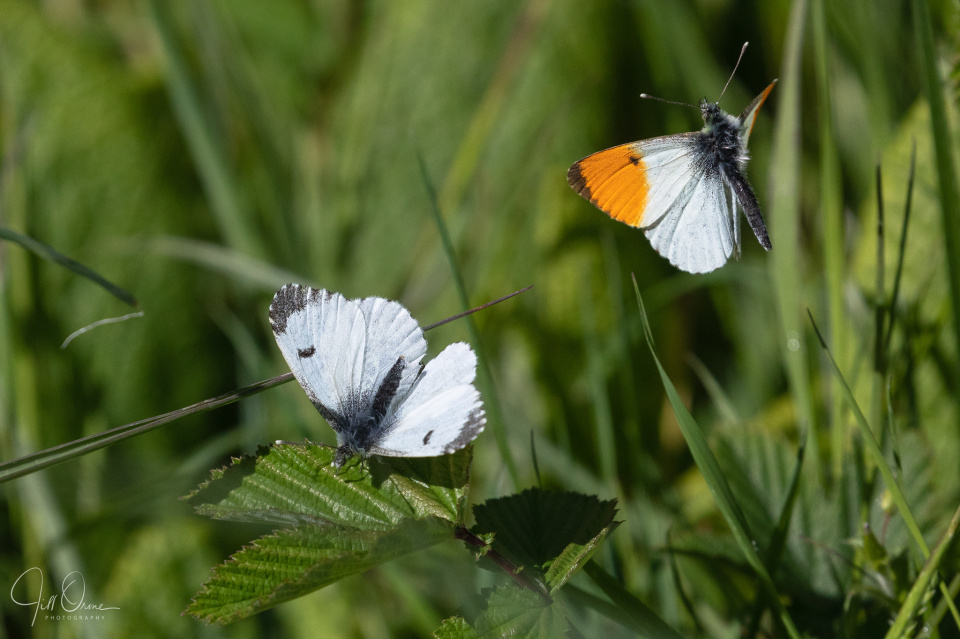 R and I began the day with a walk at Croome. It was sunny, and fairly warm, though still changeable: some dramatic weather blew through from the Malverns while we were there, forcing us to seek temporary shelter. As well as taking exercise we were hunting dragons, and we did spot one – either a Four-spotted or a Scarce Chaser, I think – but it flew too high and fast through the shrubbery for me to get a lens on it. R burnished his credentials as a spotter though, by pinpointing two Large Red Damselflies that I hadn’t seen, and all in all I felt reasonably happy by the end of our visit that the Odonata season is at least starting to get under way at Croome.

We were walking across the island between the two metal bridges when a female butterfly (on the left here) fluttered past us and landed on a nettle. “What is it?” said R. “Ummm,” I said. “I really need to see the underwing to be sure…” at which point a male Orange Tip swooped in, sealing the identification. She immediately raised her abdomen – not to encourage him, as you might think, but to make it impossible for him to couple with her. This means that she has already mated and is carrying fertilised eggs, and she won’t mate again – no matter how beautifully he flutters his orange tips and wafts his pheromones across her. He persisted for a short while, but she was adamant, and in the end he accepted rejection and flew away to try his luck elsewhere.

After our walk we said goodbye in the car park, and R went off homewards while I set the satnav for Glastonbury, where I’ll be taking part in an Odonata workshop for the next two days. When I found myself, half an hour later, sitting in the car park at Gloucester Services, watching hailstones the size of small marbles bouncing off the car bonnet, while a thunderstorm flashed and crashed overhead, I wondered what on earth I was doing with my life. And when my tyre pressure alarm went off shortly after I’d left the M5, I began looking for something sharp to bang my head against, and fervently wished myself back at home. But after a couple of phone calls I found a local garage that was prepared to check the tyres for me, and the verdict was that there was no puncture, and the problem was most probably a slow leak of air while the car stayed largely unused during lockdown.

After sorting out the car I decided that there was still time for me to swing down to Ham Wall to take a stroll in the warm early evening sunshine, before settling into my hotel. I was surprised to find the car park fairly full, and lots of people (and dogs) out walking on the reserve – I hadn’t realised that it had become such a popular place. I was able to improve my bird list, but more importantly I found a small damselfly roost, and recorded the first Variable damselflies I’ve ever seen. I also saw a Broad-bodied Chaser and a Scarce Chaser hunting along the old railway line, though neither of them settled for a photo – but I’ve put a couple of the damsels on my Facebook page, if you’d care to take a look.