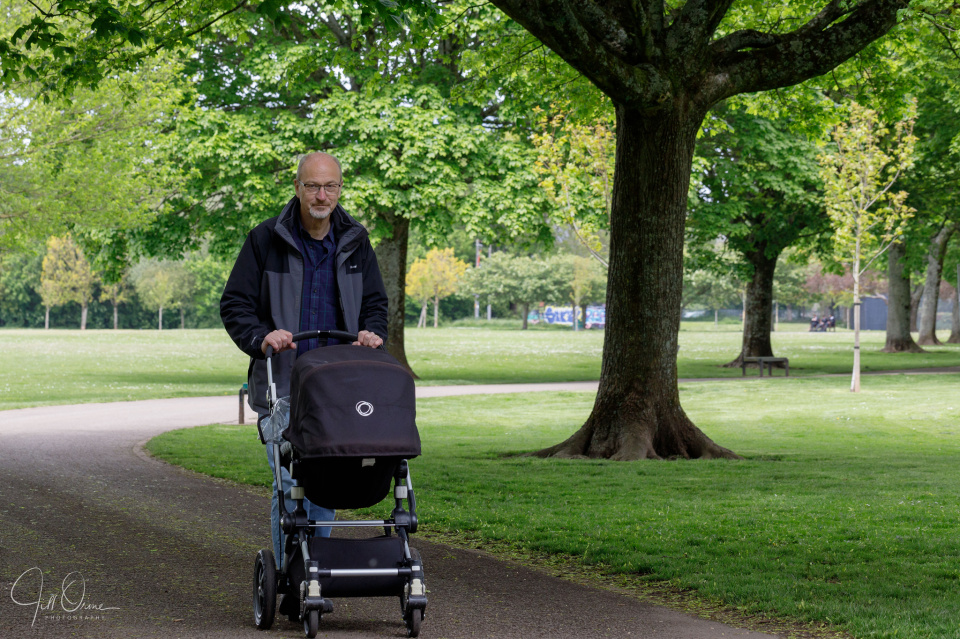 R and I had to change our day in the Principality this week, because of my road trip tomorrow. We drove over through some biblical weather, but despite gloomy forecasts from both the Met Office and the BBC it cleared as we arrived, and we had two nice walks with The Boy in warm spring sunshine. I’m keeping my fingers firmly crossed that the weather in Somerset will be as good, though as I’m writing this it’s raining so hard that the gutter outside my study window is overflowing. Sigh.

Anyhoo, despite having taken photos of some blippable bits of Baby B, and of a horrified crab spider I found in his garden, I decided that today I’d post Granddad doing pram pushing, because it’s unusual for me to catch him without either a guitar or a photograph face on. We were taking it in turns to push the sleeping babe up and down this bit of path in the shade of the trees, while the other sat on a bench drinking coffee, and I suddenly spotted the photo opportunity, lifted the camera and called, “Smile!” As you can see, I have quite a lot to put up with in the taking direction department, but it’s almost a smile, and I like the way a little shaft of light fell on him, which I’d tell you was down to my timing if I thought you’d believe I was that competent.

Baby B was also charming today, by the way, except when he suddenly wasn’t, which was every time he became over-tired and in need of another nap – at which juncture he starts making a noise the BBC radio sound effects department might well use in a drama about someone suffering from severe and painful constipation. This is very much not charming, and I’d like to think that he’ll stop doing it once he gets the hang of words. Or sooner, ideally.