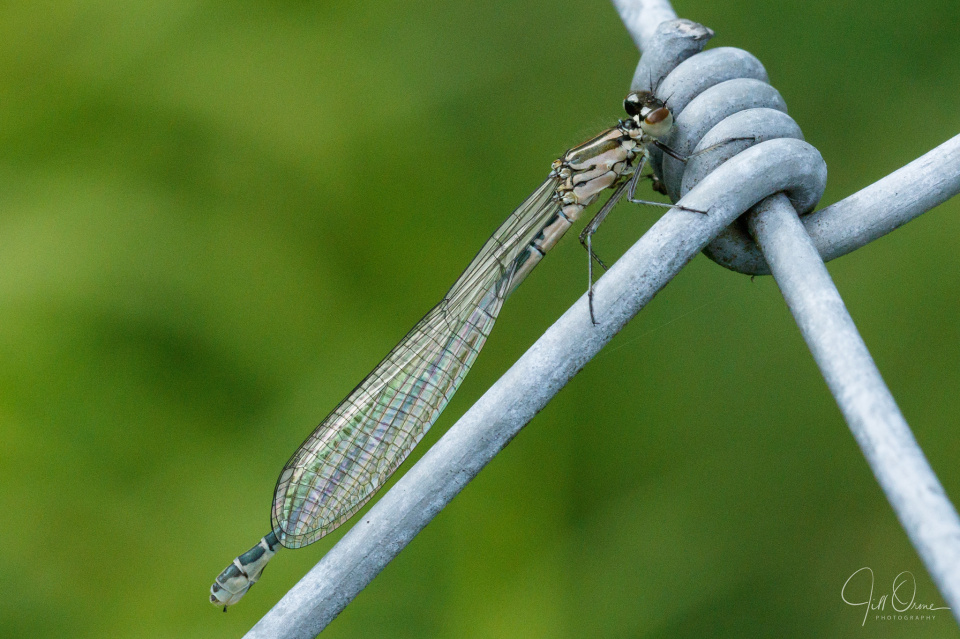 It was another day of crazy weather. During a visit to Grove Hill this morning I was rained on, hailed on, blown hither and yon, and steamed by brief periods of blazing sunshine. I also narrowly missed getting fried on an electric fence, and eventually staggered back to the car rather discombobulated, covered in blossom petals, and caked in mud to the hocks. I had to clean mud splashes off the front element of my macro with spit before taking this, and then wipe the camera over with a damp cloth and dunk the lens hood in water when I got home.

It would be fair to say that it wasn’t my happiest ever visit to this little reserve, which usually offers me a pleasant walk and some nice wildlife, but I was happy to see my first Azure Damselfly of the year, and happier still to catch up with her when she came to rest on the fence surrounding the large pond. She’s still immature – as shown by her putty pink colouring, and the fact that her wings are still soft and iridescent rather than transparent – and because of that her flight pattern today was weak and fluttery, with frequent rest stops. As she matures the pink will turn to either green or blue; I suspect the latter, because there are already small areas of blue showing on the pronotum and some of the abdominal segments.

The only other Odonata I saw today were a mature male Large Red Damselfly at the big pond, and an immature dragonfly which was flying weakly away from the lower pond towards the nearest hedgerow as I first walked onto the reserve. I mentally marked the place at which it reached the hedge, went directly to that spot, and searched, but I wasn’t able to find it. This wasn’t surprising, because even mature dragons, with their colours well developed, can blend remarkably well into foliage if they keep still, and when they’re immature they’re almost impossible to track down. As they should be, of course, because this is when they’re most vulnerable to predation, and their instinct at this stage is to move as quickly as they can away from the water from which they emerged into an area with a lot of vegetation, such as trees or long grass. Here they stay for a week or more, keeping themselves to themselves, hunting and feeding, until they’re strong and sexually mature, at which point they’re ready to go to the nearest breeding water to look for a mate. I’ll never know what today’s dragonfly was, but experience suggests that it was most likely to have been a Broad-bodied or Four-spotted Chaser. I hope that by the next time I’m able to visit Grove Hill I’ll be able to enjoy watching both species hunting and battling over the ponds.