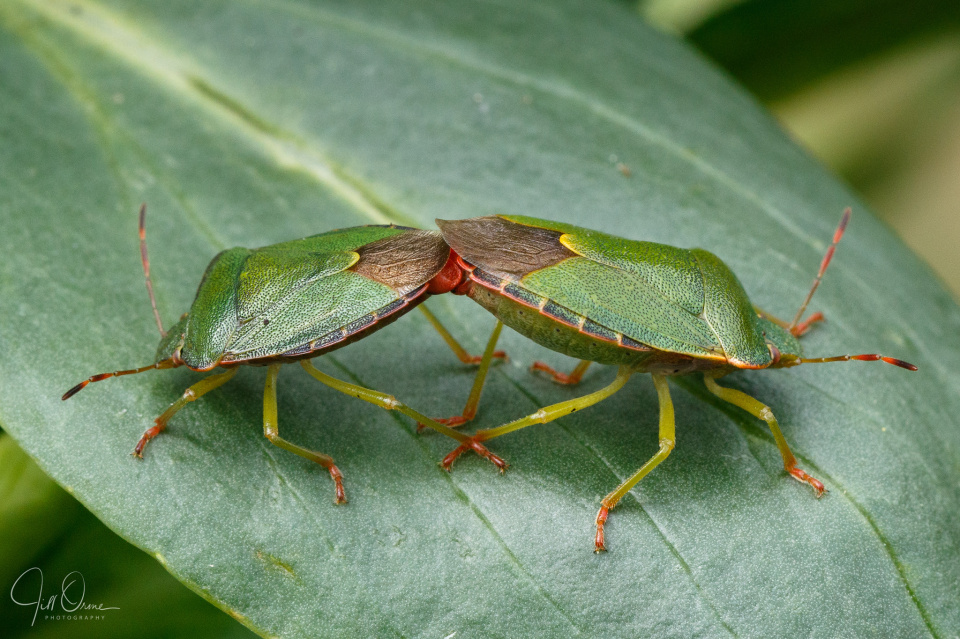 This morning was bright and sunny, but I had work to do at my desk and I failed to take advantage of it. By the time I was free to pick up the macro and go out in search of tiny subjects the best of the light was gone and it was threatening to rain again, but luckily I managed to complete my garden mini-beast safari before the torrential downpour began. The ground is now so saturated here that we have standing pools of water in several areas of the garden, and I’m starting to wonder if the driest April on record will turn out to have been followed by the wettest May.

I was searching the red valerian that grows on top of the garden wall for a Rhingia campestris I’d lost when I spotted this pair of green shieldbugs getting jiggy. I tend to think of this species as the most boring of our shieldbugs because it’s so… green… and I was rather taken with the contrasting red accents on these individuals, which I don’t remember noticing before. Perhaps they were blushing at finding themselves being photographed in flagrante. 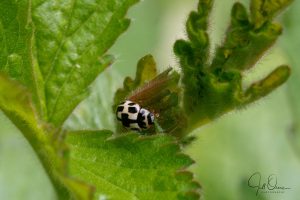 The extra is a 14-spot ladybird, which I only spotted in the centre of a wood avens plant because of its striking art deco livery. This species, which glories in the Latin name Propylea quattuordecimpunctata, is usually described as being yellow and black, but like a number of other ladybird species it’s quite variable both in colour and in the pattern of its spots. It’s a voracious predator of aphids, and though it’s hard to make out, I think that’s what this individual was eating.