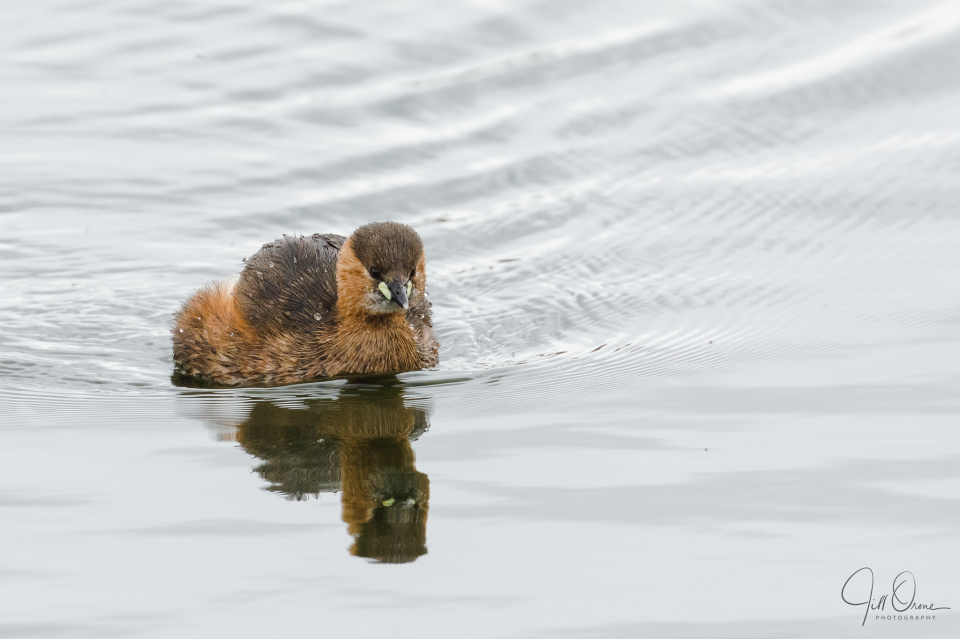 It was still fairly stormy today, but after being stuck at home for three days I was stir-crazy, so I ventured out to Kemerton Lake to see if the little grebes were coming into their breeding plumage. If you compare today’s photo with this one, you’ll see that this little chap is much redder than the one I photographed six weeks ago – though there’s still some way to go before he or she achieves their full glory. The scientific name for this species is Tachybaptus ruficollis; tachybaptus is Greek and means a fast diver (which they certainly are), and ruficollis comes from two Latin words and means red necked.

One of my books describes little grebes as ‘secretive’, but that hasn’t been my experience of them – though perhaps ‘enigmatic’ would be a reasonable description. They’re so small that you’d expect them to be shy and nervous, but on the lakes where I see them they’re independent and intrepid: they don’t tend to congregate (in fact they’re quite territorial), and swim fast around the open water, diving frequently for larvae, molluscs and small fish. When they do feel threatened they tend simply to dive, though I did see one put briefly to flight by a gull today. At Kemerton they swim close to the hide even when it’s clearly occupied, which almost no other bird will do.

I’ll keep visiting this lake for the next few months to keep an eye on the little grebes. Breeding pairs can have two or even three broods in a season, so there should be plenty of opportunity to see them with their young – though given how small the adults are, for the chicks I may need an Even Bigger Lens.