After a lunch time haircut in Stow-on-the-Wold I zoomed up to the owl field, to be met by the news that two shorties had been out hunting for an hour while I was being shorn, but had now gone to roost. I also had to go and bang my head against a tree on hearing that there were three owls wandering around, hunting on the ground close to The Wall, on Sunday – the day on which I turned back part way to the field, because the weather was so bad I was sure no sensible owl would be out and about.

The good news: the owls are still with us.

For the next two hours nothing much happened, except for the shrike popping in and out, and Mark (of Mark and Ruth Photos) spotting three ring ouzels – a bird I’d never seen before, but of which I now have some record shots. I was starting to think about going home, and then maybe going out to BGCC, when suddenly a barn owl appeared and made a couple of passes through the fields, followed fifteen minutes later by a shortie. All thought of going anywhere else, of course, immediately vanished from my mind.

The light was murky, and I was struggling with focus on the flight shots, so I was really happy when the shortie took a brief rest on this wall, quite close to the lane and well within sensible range of my lens. I rattled off a couple of dozen frames before it took off, and caught it in a range of attitudes – my only problem this evening being which to post. As you know, I do trust R’s eye, so I’ve featured the full-face shot because that’s his favourite – but personally I think I prefer the extra, with the owl checking out some other bird that happened to be flying over. I’ve posted a short sequence to Facebook, if you’re interested. 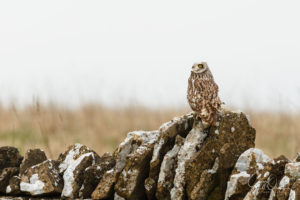 So, no camera club for me tonight; instead, lots of culling and processing, and a little Crash Bandicoot dance at having caught some quite nice portraits of my favourite bird.