If you ever feel the need to stay at an hotel on a mud flat, in humidity of 90+%, enveloped by an all-embracing miasma of pig slurry, and with the room thermostats centrally set to Heston Blumenthal Slow Roast, just let me know: I can recommend exactly the place.

It would be fair to say that after five hours of driving, much of it stop-start on the M6, I wasn’t in the sunniest of moods. I began by blaming myself for travelling at the wrong time of day – I had been planning to set off at about 11am, but everything I needed to achieve at home first took longer than I had factored in, and it was 1.30pm when I finally got away – but other people assured me that in fact there is no good time to do that journey: the M6 north is an utter nightmare, and that’s all there is to it.

When I reached the hotel it was filling up fast with fellow-invitees to Helen and Jon’s wedding, but those of us who’d travelled from the south and survived the M6 were able to recognise each other immediately by the slightly tearful expression of exhausted resignation we all wore, and shared a special bond. By the time the last members of my own extended family arrived and we were able to sit down to dinner, it was so late that I was already thinking about breakfast.

It’s possible that a largish quantity of red wine may have been consumed through the evening.

For those of you who’d prefer me to stop moaning and tell you something useful (other than “avoid the M6”, that is): this is the River Wyre in Lancashire, looking from the north bank towards the town of Poulton-le-Fylde. The bridge is called Shard Bridge, and carries the A558 from Poulton to (it would seem) nowhere in particular. The Wyre runs into Morecambe Bay, which is notorious for its treacherous tides – it’s extremely shallow, and therefore the sea can go in a matter of minutes from invisible to overwhelming – and the same phenomenon occurs on this stretch of river, which is only about five miles inland. The tide turned while we were at dinner, and the speed with which the water level rose, and the ferocity with which it was suddenly flowing, were pretty alarming. I certainly wouldn’t want to be caught on those mud flats in a rising tide.

I popped out and took a couple of photos of the bridge after darkness fell, one of which I’ve put in as an extra. I didn’t have a tripod so I couldn’t do a long exposure, but I still rather like the stretched reflection of the car headlight, balancing the static lights of Poulton. 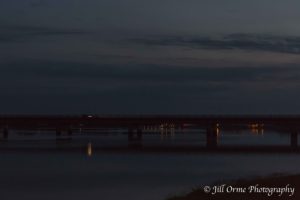