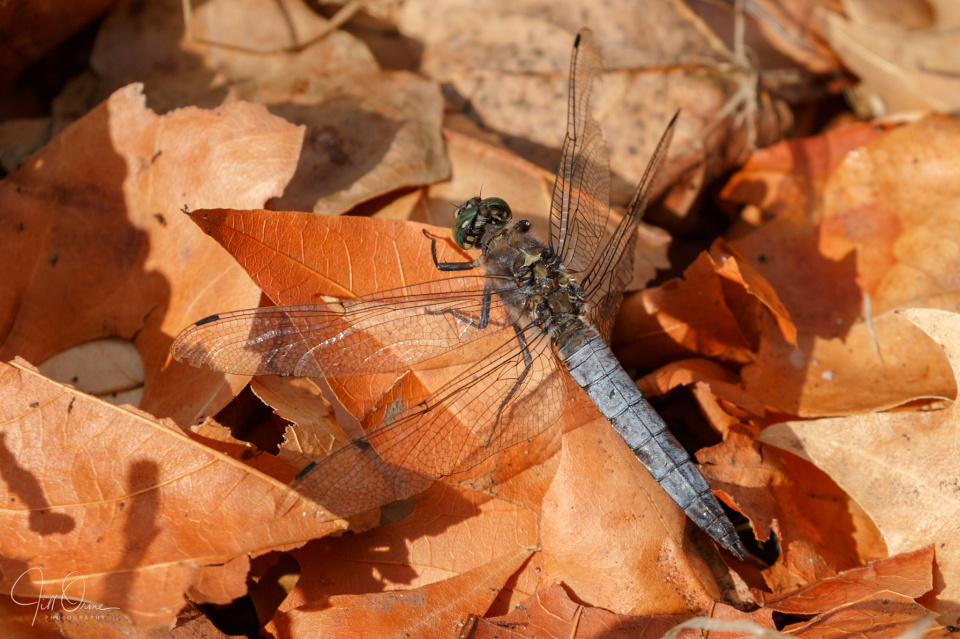 R and I made another early trip to Croome today, completing our walk just as the park was beginning to fill up and before the day became too hot. Most of the dragons at the lake this morning were male Black-tailed Skimmers, which I find almost impossible to photograph in flight because of their speed, and the fact that they change direction so often and so dramatically; but luckily they only ever make short flights, and then return to a favoured perch to rest. Out of several possibles, I’ve chosen this photo because I like the contrast between the Skimmer’s colouring and the russet leaves he chose as his resting place.

Black-tailed Skimmers are medium-sized dragonflies, and superficially the males look quite like the other species that have this blue pruinescence over their abdomens – most notably male Scarce Chasers; the most obvious pointers to this being a BTS are the fact that the bases of his wings are clear, and his dark green eyes. Interestingly (to me, at any rate!), the pruinescence has worn away from the sides of his abdomen, which suggests that he has mated, because this is the point at which the female grasps the male while the couple are joined in the mating wheel. Female Black-tailed Skimmers look very different to the males – mainly yellow, with longitudinal black stripes – but they don’t seem to have the same basking habit (at least, not at ground level), and I only ever seem to see them when they’re ovipositing.

As we walked back towards the house along the river we saw an Emperor behaving slightly unusually: they generally fly for long periods, eating on the wing, but this one was making only short flights and then landing on a clump of reeds. When I managed to track him to rest and take some photos I realised that he was extremely battered, with tatty wings and at least one hole in his abdomen, and frankly he looked as though he wasn’t long for this world. Emperors are our biggest dragonflies and are ferocious predators, but this was a reminder that they’re highly territorial and capable of damaging each other, and that they’re also preyed on by some species of birds.