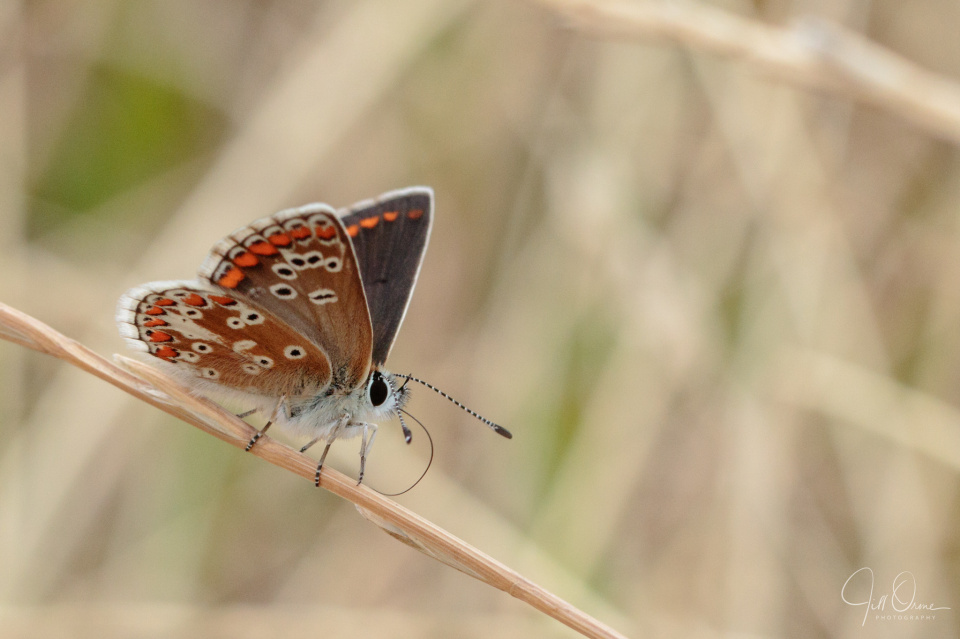 After a pretty frustrating few hours at my desk, I stomped off out with the macro in the middle of the afternoon, in a very bad temper. Not having the time to go anywhere better, I walked up the village to the butterfly field, and was shocked to find how brown and parched it is: there were almost no flowers showing anywhere among the dead grasses, and the scores of butterflies that were swooping about the place just a couple of weeks ago have largely disappeared. In fact, I found a few dead individuals lying in plain view, which is fairly unusual, and it was telling that they weren’t particularly faded or battered, but seemed just to have died – presumably of starvation.

Normally I would have been delighted to discover that the new broods of Brown Argus, Common Blue, and Small Copper are emerging, but in the circumstances I was slightly distressed to think that – unless we get a reasonable amount of rain very soon, to bring on some new weed growth – they’re likely to live for an even shorter time than is usual with these small butterflies. I can only hope that their larval fat stores will keep them going for long enough for them to mate, and for the females to oviposit.

This tiny Brown Argus was very fresh and nervous, and I didn’t want it to expend useless energy in trying to get away from me, so I just snapped a few images and then left it in peace. It was more entertaining to try to catch up with the numerous grasshoppers that were pinging back and forth across the path – I’ve probably said this before, but they seem to me to present almost the ultimate macro challenge, as they really don’t care for being approached, and have the means to remove themselves at high speed from perceived danger. Just occasionally you find one that decides that its its best option is keeping still and hoping not to be noticed, and I was especially impressed today by the camouflage of what I’m told is a Field Grasshopper. I just happened to see it leap and land in some short grass, and was then able to home in on it – otherwise I’m quite certain that I’d have walked right past without noticing it. It stayed so still as I moved around it with the camera that the final shot in my sequence, which is the one I’ve posted, is only fractionally cropped.

This evening R and I went to the cinema in Evesham, to see Ocean’s 8. I’m really not sure why.