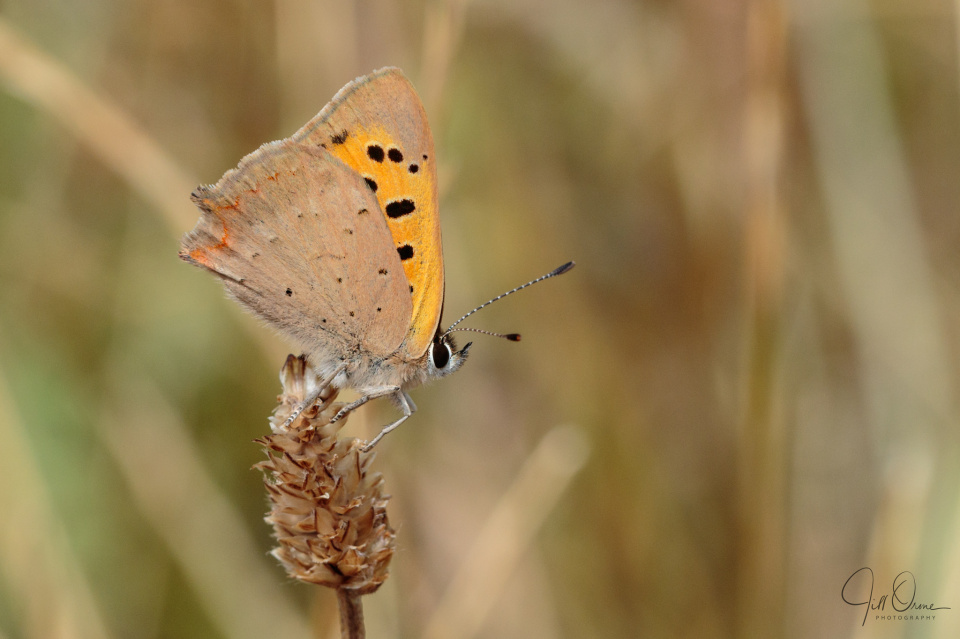 Occasionally, I know what I want to photograph and where I might find it, and when I go to that place my subject is there and I get the shot I want. Very occasionally.

Yesterday my camera battery ran out as I was part way round the butterfly field. I already knew that I’d bagged my Brown Argus, so I shrugged and set off for home – but about ten seconds later found myself cursing, when I spotted two fresh Small Coppers. I debated going home for a charged battery and then going back, but decided instead to take the risk that they’d still be in the same place today. At 9am this morning I went to the butterfly field, cursed again (silently) as I found myself making way for a woman with two waggy dogs to play through ahead of me, then walked slowly towards the spot where I’d seen the Coppers, and was rewarded by one of them fluttering past me and coming down on this seed head.

In the interests of making it sound as though I suffered for my art, I feel I should point out that the seed head was only a few centimetres off the ground, and the patented elbows-on-the-path-and-bum-in-the-air posture didn’t cut it: I had to lie down to take this. And then return myself to the vertical afterwards, which was harder. The Small Copper was unimpressed, and left after this shot was taken, so it’s just as well it came out.

I’ve asked The People Who Know whether there’s any way of me telling this butterfly’s sex, but the answer was no: male and female Small Coppers are almost identical, though females are slightly larger than males – but unless you see a couple together, or happen on an obviously gravid female, any attempt to ascribe gender is just a guess. I don’t mind that though – it looks somehow enigmatic to me, and gender neutrality just adds to its mystery.

The Small Copper is widespread across the UK, though it doesn’t occur in the more mountainous bits of Scotland. It favours open land where its favoured foodplants can be found – the adult butterfly isn’t an especially fussy eater, but its main larval foodplants are sorrels and docks. This is a species that can go through three, or even four, generations in a year, with the first emerging in May from overwintered larvae, and third or fourth brood adults flying into October. This is a second brood specimen, and I’m hoping that it can survive the current drought for long enough to breed.

Once I’d bagged my Copper, I completed my walk and photographed a few other things that caught my eye – some of which I’ve posted here, should you be interested.