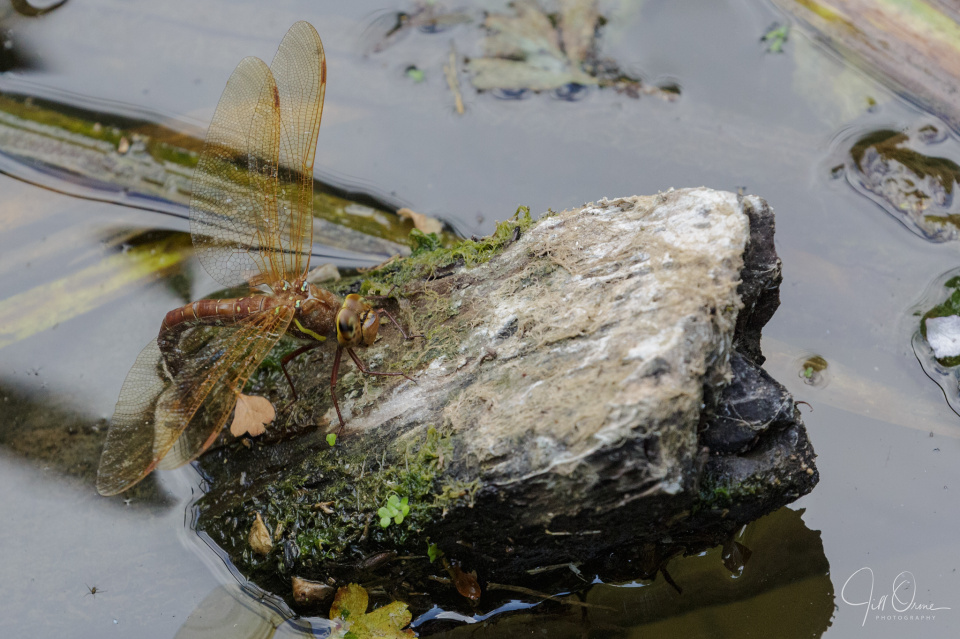 After the relief of a couple of cooler days, today’s temperature was back up in the high twenties and the humidity was through the roof; so I bunked out of another nature reserve walk, and went to Stratford for lunch with R instead. We walked back to the car along the river, and close to Lucy’s Mill Bridge spotted a majestic male Brown Hawker flying circuits. He was the first dragon we’d seen, and I was desperate to get a photo of him – I’ve mentioned this species before, but if you’ve never seen one it’s hard to imagine how very striking they are – but he was moving so fast and changing direction so frequently that I simply couldn’t get focus.

Luckily, R then noticed this female ovipositing close to the river bank, and I was able to get some shots of her at only the very slight risk of falling in the water. It’s unlikely that the patrolling male was the father of the eggs she’s laying in this shot: mating between Brown Hawkers usually takes place up in the tree canopy, and after the two separate the female chooses her oviposition site alone. Here she is injecting her eggs into some kind of vegetation below the surface of the water, where they’ll stay until next spring. After they hatch the larval stage will last between two and four years, depending on water temperature and food supply, and during this time most of her brood will be predated by other creatures. Those that survive and reach the appropriate size will leave the water at night, and complete their metamorphosis on waterside vegetation during darkness, so that they’re able to fly by morning.

Brown Hawkers have quite a long flight season, between June and October, and can be found in a wide range of habitats. Though they’re solitary they aren’t especially territorial and are rarely aggressive towards each other, and I have seen two flying hunting beats quite close together without any apparent aggravation. They have a distinctive flight, which involves periods of gliding propelled by seemingly quite lazy wing beats, so it’s surprising that they manage to move as quickly as they do. This speed, coupled with their excellent camouflage, makes them frustratingly difficult to capture in flight – even in situations such as we encountered at Sezincote the other day, when a single large male was patrolling an open pond.

As I haven’t yet managed a photo of a male that I’m prepared to share with the world, I’ll point you towards the BDS page for some images that show the difference in colouration between the sexes – the most obvious one being the male’s bright blue eyes.