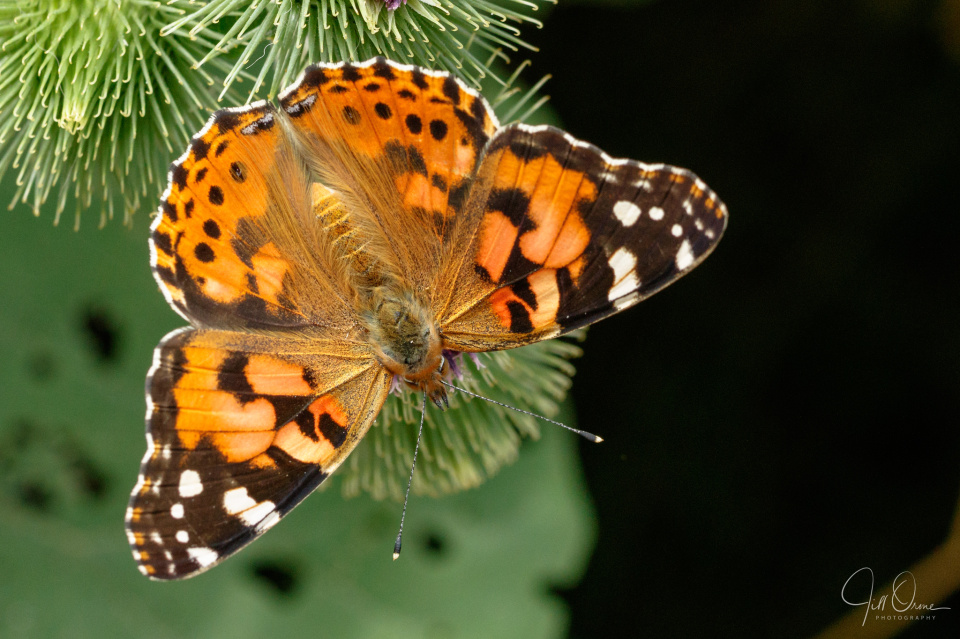 My find of the day at Oversley Wood this morning was this lovely, fresh Painted Lady, which given its pristine condition must have been born here – an offspring of migrants that arrived earlier in the summer from North Africa. The migration is thought to be triggered by population density, and in a good year the whole of Europe can be colonized by this butterfly; it has even been recorded in Iceland.

The success of the Painted Lady as a colonizer is partly due to the fact that it’s not at all fussy about habitat, being comfortable living anywhere that can provide thistles, which are its main larval foodplant. Eggs are laid singly on a leaf, and hatch about a week later; the larva will then move to the underside of the leaf and spin a silken tent over itself, under which it will develop while eating the leaf cuticle. The larval stage lasts for about a month, and the pupal stage for about a fortnight.

In continental Europe this butterfly broods continuously through the summer, and even in the UK there can be a second brood in a good year. Sadly it’s unknown for the Painted Lady to be able to survive a British winter, but some individuals have been reported as emigrating back to the Continent in the autumn. Whether climate change will cause its base range to move further north remains to be seen, but I rather hope not: I like the fact that we don’t see it every year, and when it does arrive it’s a harbinger of a good summer.

I can’t tell you authoritatively if this individual is male or female, because the markings of the two sexes are almost identical, but there was something about the determination with which it was eating that made me think it was a female – I had no sense that it was keeping watch for a potential suitor, and fresh male butterflies are usually very focused on finding a mate. The thistle patch on which it was feeding was covered with insects this morning, including the fresh female Brimstone in my extra photo, but the Painted Lady was definitely in charge: each time it exhausted a flower it took off off, flew a slow and graceful circle, and landed on a different one, and if that flower was already occupied by something else, the diner was firmly and promptly ejected. 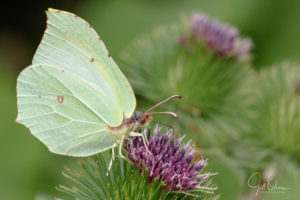