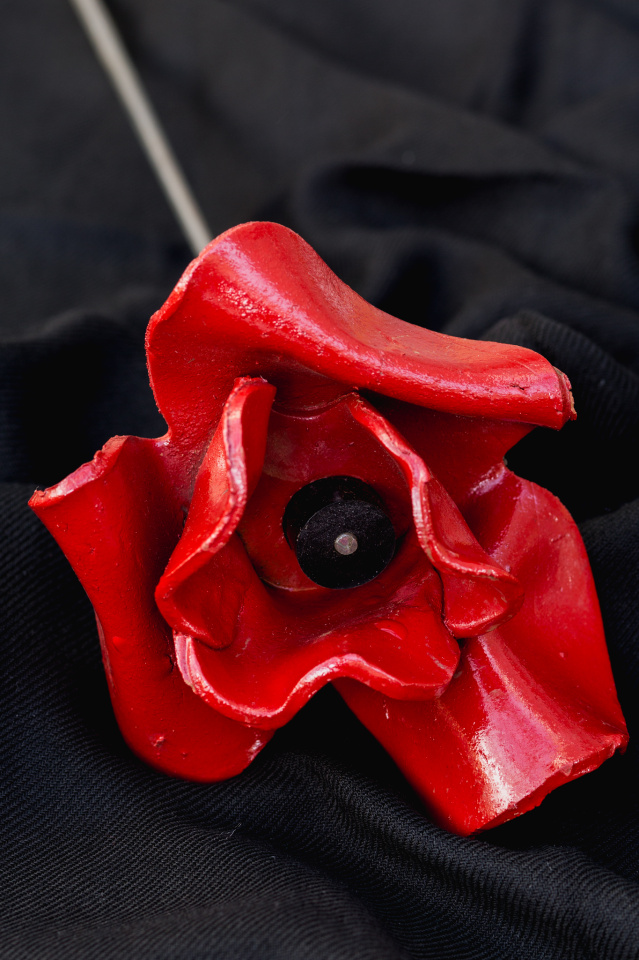 Most of you will probably recognise this immediately as one of the ceramic poppies from last year’s installation Blood Swept Lands and Seas of Dead at the Tower of London. When the installation was dismantled the poppies were sold off for £25 each in aid of six Forces’ welfare charities – though inevitably some people later tried to cash in by reselling them on line at inflated prices. Sadly there are always some people who just don’t get what seems obvious to the rest of us.

The three family members of whom I’m thinking today all actually survived the First World War. My father had two uncles who were in their late 20s when war was declared; both came home, but they never recovered from being gassed, and both died within a few years, before my father was born.

R’s grandfather also came home – having been a competition-standard sportsman he was employed as a message runner, and this almost certainly saved his life. He told R that on more than one occasion he returned to his unit with the reply to a message, only to discover that there was no-one left alive to deliver it to; a story which is supported by his war record, which shows him changing regiment during his service. In 1917 he received a dreadful leg wound, and was invalided back to England for treatment – after many months of recuperation he was declared fit to return to France, but luckily the war ended very shortly afterwards.

These stories are small and commonplace within the grand scheme of the horror that was the Great War, but they are significant to our family which is why they’re in my mind today. Let’s all fervently hope that no future generation has to suffer as much as that one did.

Incidentally, if you haven’t run across it, there is a book on the aftermath of the First World War which made a great impression on me when I read it. It’s called The Great Silence by Juliet Nicholson, and I recommend it if you’re interested in social history.