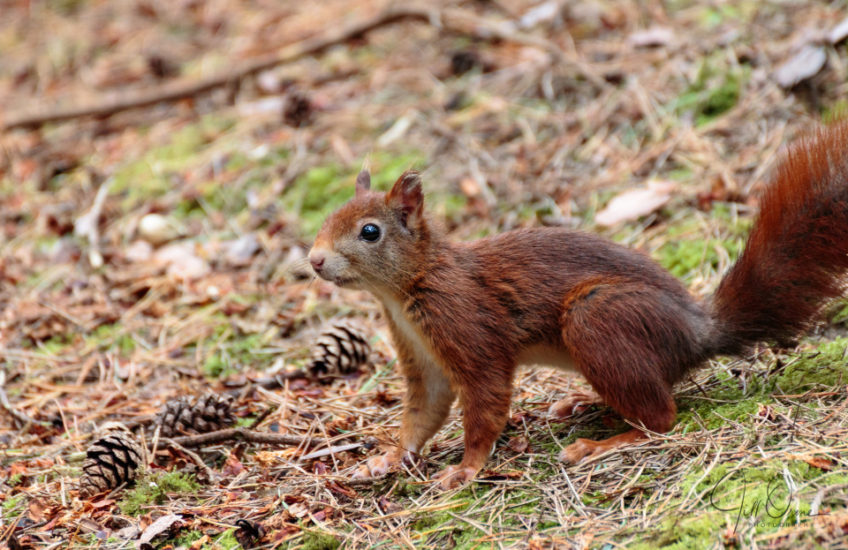 R and I have been gadding about enjoying ourselves again: we’ve been in Liverpool for the last couple of days – about which more when I sort out the photos and back-blip them – and when we checked out of the hotel this morning and left the city to come back home, we began by heading northwards and travelling a few miles up the coast to the National Trust estate at Formby, in search of red squirrels. This detour was at my suggestion, because although R had encountered them before, both in Scotland and in Scandinavia, I’d never seen one – and Formby is one of only a few sites in England where they’re protected and currently thriving.

As we approached the entrance to the estate I was a little nervous that we might not see any squirrels and that it would therefore prove to have been a wasted trip, but I really needn’t have worried: the place was teeming with them. A little way into the pine woods there’s an area surrounded by a low fence in which some feeding stations have been placed up in the trees, and these were especially busy with squirrels collecting food, and then taking it down to the ground and burying it; it’s interesting and touching that this instinct to prepare for winter hardship still prevails, even though I would assume that the estate provides food year-round. A high proportion of the squirrels we saw looked to be juveniles, and there was a great deal of entertaining scampering and chasing going on.

The light was pretty dreary in the woods today, and my lens struggled to find focus, but I was thrilled to have the chance to watch and photograph these delightful animals, and overall I was quite pleased with the photos I managed to capture. The two shots I’ve posted (the main image being my favourite, and the extra R’s) are of the same squirrel, which is still fairly young, I think, but just starting to develop its adult ear tufts. I’m a little concerned that it appears to have mange around the base of its tail; I have no idea if that’s a problem that can be treated in a wild population such as this, but I do know that the county Wildlife Trust is working to protect Lancashire’s red squirrels and encourage their spread into new areas, so tomorrow I’ll email a couple of my photos to them for their information. 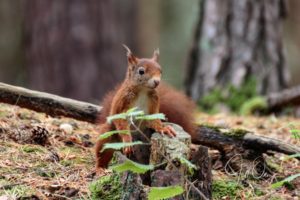