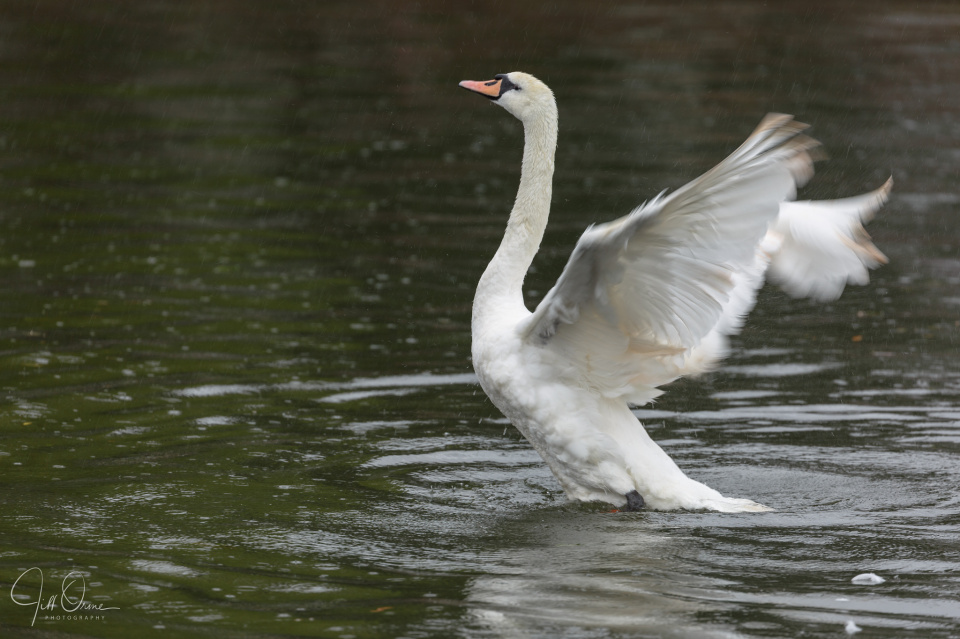 I knew exactly how she felt – I was tempted to do the same thing myself. The drought finally broke properly this afternoon, with several hours of heavy rain, and the swans on the Avon gave every indication that they were loving it. If you view this full screen, you should be able to see that some of the rain is bouncing back off her – as indeed, it was off R, me, and my camera; but truly, none of us minded.

I can’t let this blessed downpour pass without giving you my word of the day (and one of my favourite of all words), which is ‘petrichor’: the smell produced when rain hits very dry ground.

The word was coined by two Australian researchers, Bear and Thomas, in a 1964 article in the journal Nature; it’s root is the two Greek words πέτρα/petra, “stone”, and ἰχώρ/īchōr, “fluid that flows in veins of the gods”. The smell is believed to come from a combination of two factors: firstly, oils that are secreted by plants in dry weather to inhibit root growth and seed germination; and secondly, chemicals produced by soil bacteria called actinomycetes. When light rain hits dry ground, tiny air bubbles containing these oils and chemicals rise to the surface and are released into the air in an aerosol effect, producing the smell that so many of us love. Heavy rain traps the oils and chemicals within the soil, which is why you’re most likely to notice petrichor after a light shower, or when the rain is just beginning.

It’s not really known why humans are attracted to petrichor, but we are highly sensitive to it, and it’s been suggested that in our distant past there was an evolutionary advantage in being able to smell rain, and thus track down water.