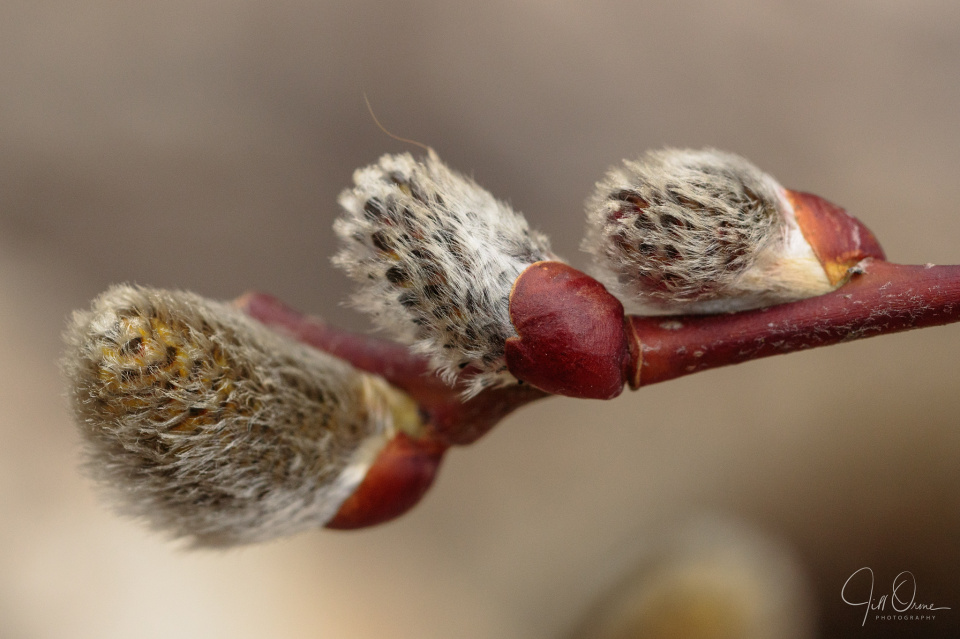 I don’t remember how I came across pussy willow as a child – I don’t believe that we had any growing in our garden – but I do remember stroking the immature catkins and thinking that they were wonderful. I suppose a neighbour may have had a tree, or maybe there were branches in the vases of seasonal flowers in the classrooms at my primary school: it was a CofE school, and pussy willow is often used in Easter flower arrangements.

These catkins are on a dwarf weeping willow I bought on an impulse a few years ago. Because I couldn’t think where to plant it, I plonked it in a pot – which it hates. I really should use it to plug one of the gaps that have opened up in the garden through the winter, and give it a chance to get its roots into some moisture. I’ll wait until it’s finished flowering though; the catkins are about to move into their feathery, polleny stage, and I wouldn’t want to send it into another sulk before that happens. Salix pollen is an important food source for early bees and hoverflies, and I hope that by the time these open there’ll be some around to take advantage of it – there wasn’t a single one in the garden this afternoon.

R and I officially achieved the status of Long Players today, as it was 33 years ago that we went on our first proper date (though we’d known each other for several years before that). We celebrated by going out for dinner, and then went to The Regal to see Can You Ever Forgive Me? I think it’s fair to say that we went on the basis of the reviews rather than because we had high personal expectations, but in the event we both really enjoyed it. Richard E. Grant was terrific, but so was Melissa McCarthy – I honestly never knew that she can genuinely act – and the story turned out to be as much about love as it was about crime and bad behaviour.