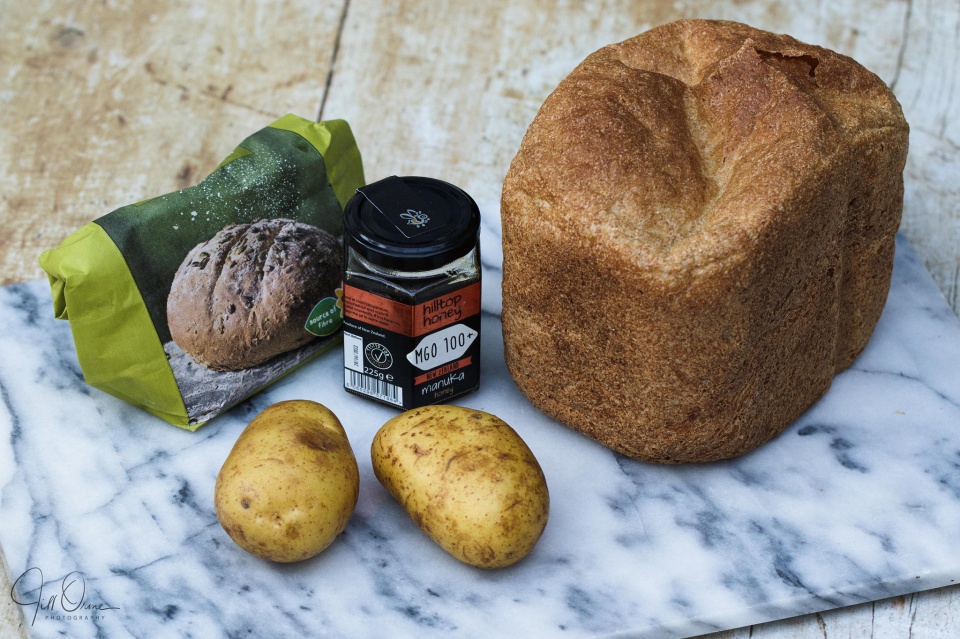 You know I’m getting stressed when I do cooking. If the political/Covid situation doesn’t improve soon, you might even catch me dusting.

So anyway, bread. I used to make a lot of bread, but home-made bread is delicious, R and I ate a lot of it, and our waistlines suffered – so I stopped. But now I’ve started again. R, who runs quite long distances these days (for reasons entirely beyond my understanding), is delighted about this turn of events, but I’m going to have to be careful that I don’t wind up the same shape as one of these potatoes.

You will have observed that this loaf is misshapen (much like my waistline); this is because it rose too high, and couldn’t sustain itself, leading to a mini-collapse. It’s not too bad though, and it will taste perfectly fine; one of our favourite loaves is a cheddar rye bread that I used to make a lot, and which collapsed quite severely probably three out of every four times I made it – but the taste was so good, my mouth is watering now just writing about it. The most likely reason for this loaf going slightly awry is my hand slipping with the honey I used to sweeten it – too much sugar would make the yeast party too enthusiastically, and cause the dough to rise too high.

The other potential pitfall with this recipe is that it contains some left-over mashed potato I had in the fridge – an ingredient that makes wholemeal bread tasty and moist, but which can upset the delicate chemistry and physics on which yeasted bread relies, because it contains fat and salt. Both of these are essential ingredients in bread, but need to be measured quite accurately because too much of either will impede the working of the yeast, so if you add more via the mashed potato you need to make an adjustment – but how much you should reduce them is a matter of guesswork, and I’ve never been very good at guessing games.

In the interests of journalistic integrity I should tell you that I don’t actually cook with Manuka honey. I have a squeezy bottle of bog-standard honey for cooking, but I had to warm it up when the honey crystallized, and it went a funny shape – if I’d used it in this photo you’d have wondered why it was leaning drunkenly against the bread. I should probably also recommend the recipe book I use for my potato bread, which is Bread Machine Magic by Rehberg and Conway. I have the old edition, which was devised for older, smaller bread machines than mine, but I believe the current edition has been revised for large machines. My copy is full of hand-written notes, because I had to recalculate quantities, and also work out substitutions for some American ingredients you can’t easily buy over here. The fact that I felt it worth putting in that much effort should tell you how good their recipes are.