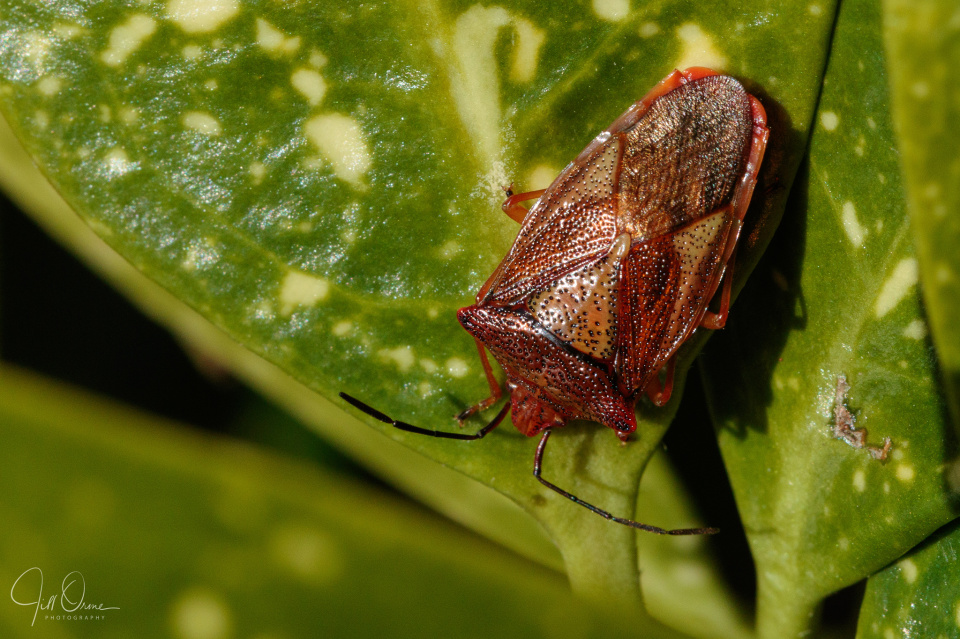 After a very stormy night, it was still pretty blowy today, but fine and bright. When I went out to check the garden for invertebrates, and the wildlife pond for debris, I found plenty of the latter, but not many of the former other than a few flies. I don’t mind a fly if it’s unusual or photogenic, but these were mainly big black houseflies, and not the best of subjects. So I was happy to spot this shieldbug sunbathing on the aucuba, where it was being whipped violently back and forth by the wind, but was clinging on with what looked like grim determination. Because of the weather I wound up taking quite a few photos, trying to time them for lulls when the wind dropped momentarily, and I was entertained to notice that every time I came in close with the camera the bug would snap its antennae out sideways at 90°. It felt as though my attention was just about the final straw for the poor thing, so as soon as I was confident that I had some in-focus shots, I went on my way and left it in peace.

Because of its colouring I assumed at the time that this was a Parent Bug, but having looked at my photos on a big screen I’m now reasonably sure that it’s a Hawthorn Shieldbug. These are green and red during the summer, but they can darken before going into hibernation; British Bugs has a photo of one with similar colouring to this little chap. If my identification is correct, it’s even possible that this is the same bug I photographed three weeks ago as a final instar nymph – which is a rather cheering thought.

This afternoon R and I went into Stratford to run another few errands, and had a bracing but enjoyable walk along the river. A little later we were sitting having coffee outside one of the cafés on Henley Street when Technophobe hove into view, en route back to her car after doing some errands of her own. It seems like an aeon since I last saw her, and it was nice to have a bit of a chat and exchange some news.