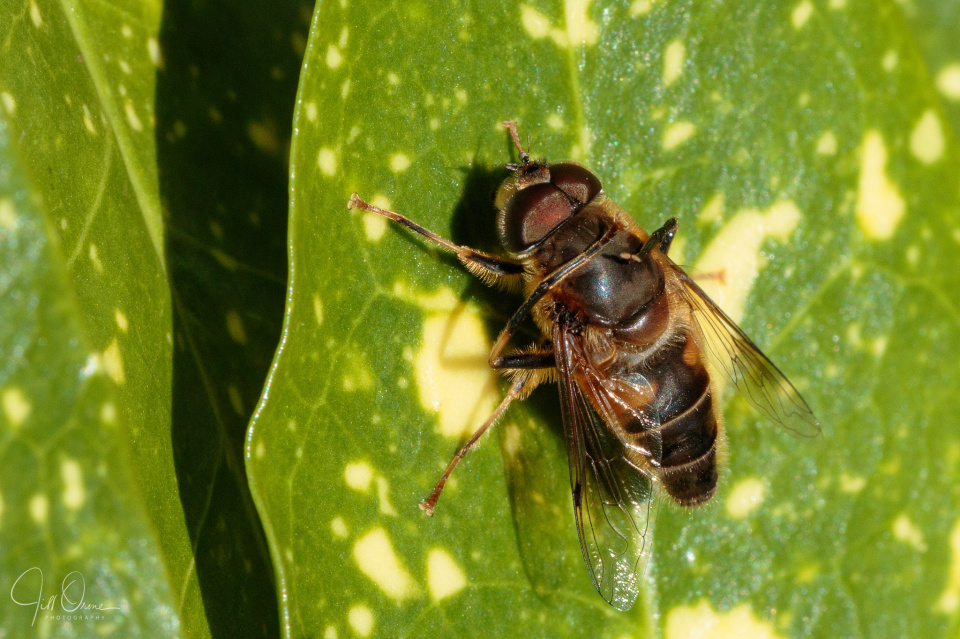 One of the earliest invertebrate arrivals in the garden this spring was a male Eristalis pertinax which was fond of basking on the aucuba, so it seems fitting that another male of that species should appear on the same shrub as the season draws towards its close. The circle of… something or other.

It always amuses me to watch insects grooming themselves; lots of them do it, but this kind of extravagant performance seems to be a particular speciality of hoverflies. Usually they do it to remove pollen, but there’s very little of that around any more, and it looked as if this chap was simply having a good old scratch. I was contemplating the advantage of having six legs, and the impossibility for most humans of bending either of our two around our backs like this, when he decided to show off just a little further, by simultaneously scratching his head with one leg and his abdomen with the other. Unfortunately this made me laugh so much that I shook the camera, so I’m afraid you’ll have to take my word for it that it was a truly funny sight.

And now I’m off to bury myself under the duvet, to avoid the posts I’ve started seeing on social media predicting that Joe Biden is going to lose the US Presidential election. Among the many things I learned in 2016 (most of which I’d far rather never have found out) is the fact that vote counts happen whether they have my personal attention or not, and if a referendum or an election goes the wrong way, I won’t feel any better about it for having lost a night’s sleep.