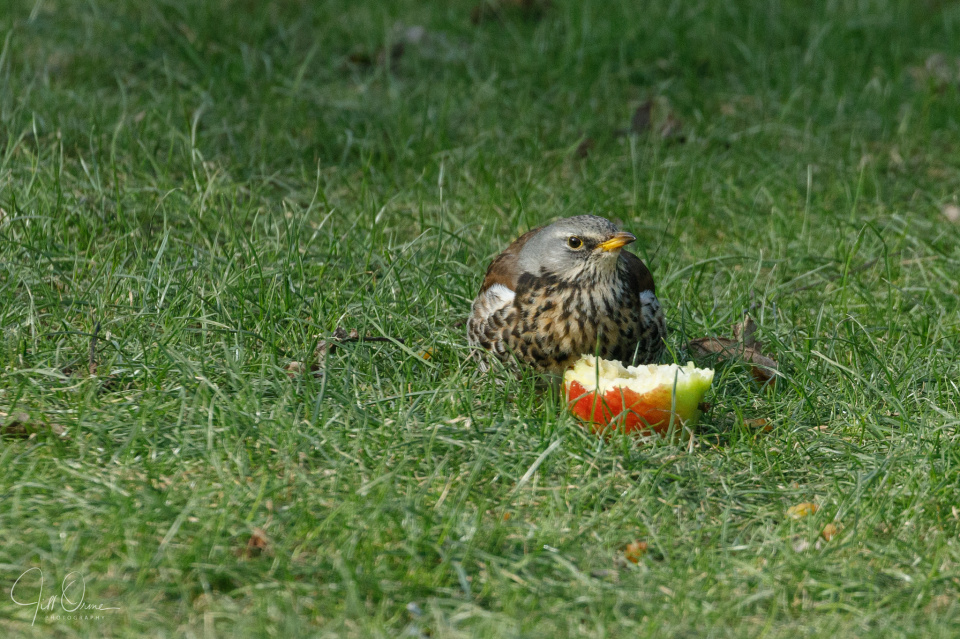 Possession, as we’ve all been told, is nine-tenths of the law, and this fieldfare demonstrated the principle perfectly today: arriving on the back lawn about half an hour after I scattered a bag of apples, it declared ownership of this one and defended it against all comers for the rest of the morning. I was honing my chili con carne recipe at the time, but found myself going to the kitchen window every few minutes to enjoy its antics and marvel at its appetite (and reach repeatedly for the camera to take just a few more photos of the performance).

The main image shows it taking a breather after eating half the apple, but still ready to defend its prize if necessary. From this angle it appears to have become apple-shaped, but if you take a look at the extra – taken about an hour earlier – you’ll see that it was pretty spherical to begin with. After putting my chili con carne in the slow cooker I went out to do a couple of garden jobs, and was impressed that it was still able to fly away; I don’t think it went far though, because it was back at the apple almost as soon as I returned to the kitchen. 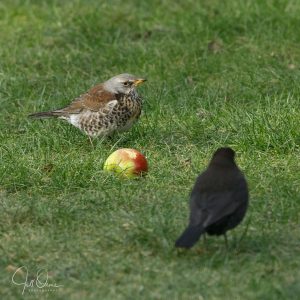 R has been feeling a bit viral today, as seems to be common after receiving a dose of the Oxford/AZ Covid vaccine, and I’ve been encouraging him to stay in the warm house and rest. I took food down to the wild garden for the foxes this evening – a job which is usually his – and as I went past this spot in the top garden I noticed a circular strip of peel, attached top and bottom to a very thin and neat apple core. I think I’m going to need another bag of apples.