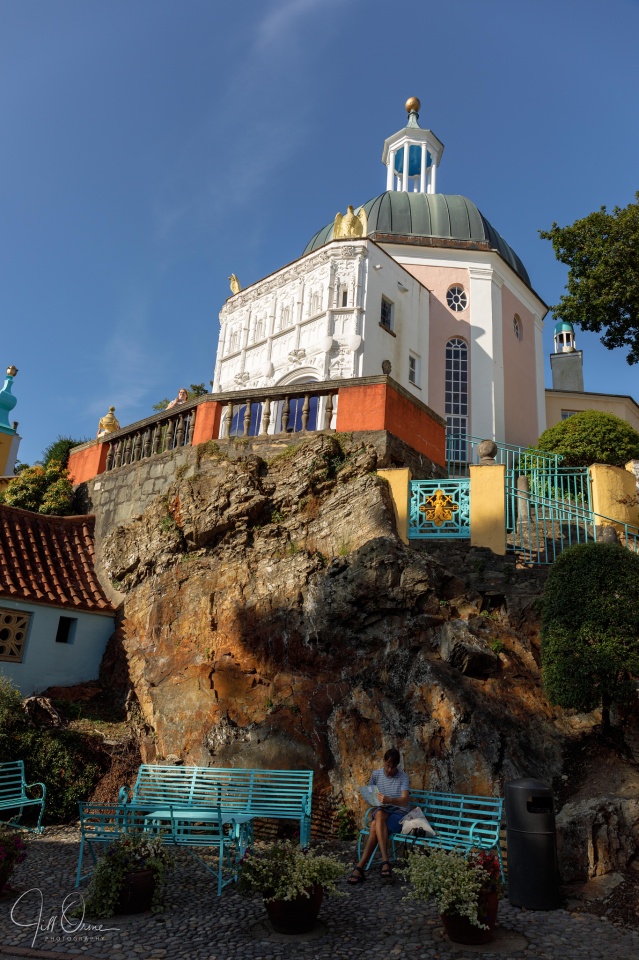 Sometimes it pays to have low expectations. R and I are at the Portmeirion Estate this evening, en route to Liverpool where we’ll be staying for the next couple of days, and although I was happy to accept his suggestion that we should break the journey in a place I’d never been to before, I’ll confess that I didn’t have much hope that the experience would be any more than interesting.

Portmeirion is wonderful. It’s also bizarre, and really quite funny – but my main emotion is a deep happiness that someone went to the trouble of creating such a charming place, along with gratitude that it still exists, and that we’ve been able to come and enjoy it. I’d fallen under its spell by the time we’d dropped our bags off in our room in the hotel, and by the time we’d walked around the village and up to to the Castell I was busily scheming about a return visit.

Even if you’re too young to have watched The Prisoner (or like me, found it too strange and didn’t bother with it), you’re probably still aware of this unique place, which was designed by Sir Clough Williams-Ellis, and built (partly from random bits of old, demolished buildings that he bought and had transported to the site) over the half century between 1925 and 1975. It’s often been stated that he was trying to copy the Italian village of Portofino, but Williams-Ellis said that it was more the feeling of the Mediterranean coast that he was seeking to recreate. After his death in 1978, Portmeirion was placed into a charitable trust, which still owns it, and which operates the entire site as a tourist attraction and holiday venue; as well as the original hotel, where we’re staying in a room that looks out across the conservatory roof and the terrace to the estuary of the River Dwyryd, you can stay in the Castell – also now a hotel – or rent one of the cottages in the village.

We were warned when we booked our stay – and then again when R called to make a dinner booking at the Castell – about potential “disruptions”, due to preparations for a large arts festival that’s taking place on the estate at the end of the week. I can’t say that the presence of a large music stage and a vast striped marquee (along with numerous contractors whizzing about in vans and diggers) have spoiled our visit – though I would definitely try to avoid this particular week if we do come again; but in the unlikely event of me ever experiencing enough of a personality transformation to be tempted to attend a festival, Festival Number 6 would be right at the top of my list.

By the time we had finished our meal at the Castell and were walking back down toward the village and the hotel, the contractors had all left, the estate was dark and quiet, and the wildlife was making its presence felt: there were at least two tawny owls calling in the woods, and every few minutes large fish would break the surface of the water in the estuary. A very different kind of magic to the colour and bustle of the village in daylight, but it only served to reinforce my deep sense of pleasure at being here.