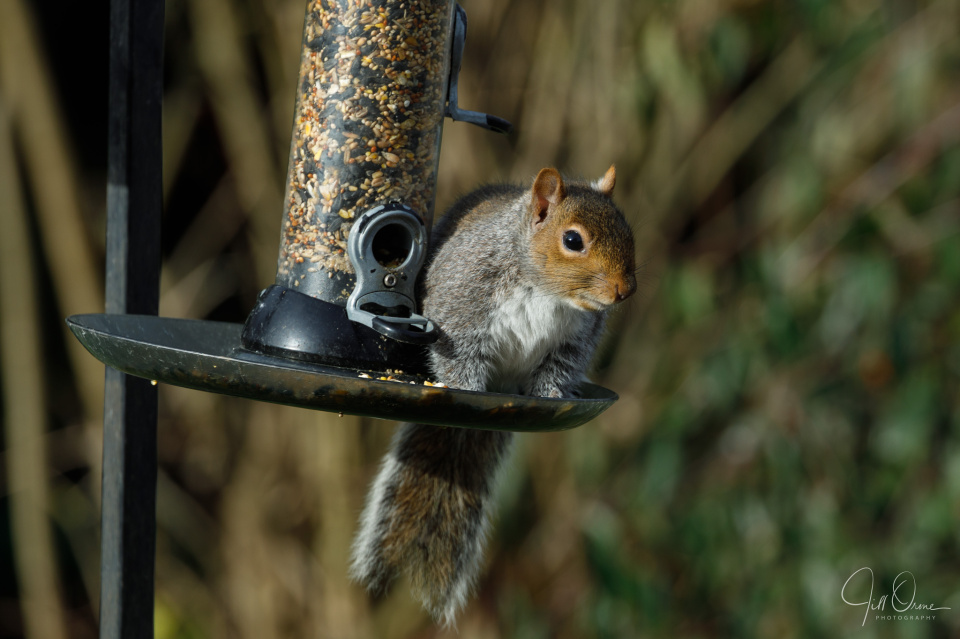 This seed feeder, and three others, hang from a metal crook with four hooks at the top. It used to live in one of our smaller flower beds, but there are two fair-sized shrubs there along with a tangle of herbaceous plants, and since we no longer have dogs one of next door’s cats has taken to skulking under all of this cover. In consequence – and wisely – the birds had started to avoid these feeders, so last weekend R and I moved the crook to an open area of lawn. It’s taken most of this week for the birds to decide that this change is acceptable to them, but they are now beginning to use the feeders again – which is good for them, but also for me, because the crook is very much closer to the house than it was before, allowing me photos from inside the kitchen.

The other principal customers of this feeding station have always been the neighbourhood squirrels, which would casually climb up through one or other of the shrubs, and nimbly jump onto whichever feeder took their fancy. Since the move though, they’ve been baffled as to how they could access all this free food – that is, until this morning. I happened to be making my breakfast when I witnessed this fat chap climbing the central pole – a funny scene in itself, because he couldn’t get a firm purchase on it, and gravity was not on his side – and then, having reached the top, trying to work out how to get from the hooks down onto the feeders themselves. After several false starts and failed attempts he managed to get onto a wire peanut hanger, and wrapped himself round it like a fat furry blanket – which is where he still was when my tea and toast were ready and I went off to break my own fast. At that time this section of garden was still quite dark, but by the time I came back to put my crockery in the dishwasher the sun had come round and Fat Boy had moved onto the seed feeder tray, so it was worth my while to fetch a camera and snap his mugshot.

Because it’s winter and they’re also trying to survive, I don’t really mind the squirrels taking advantage of the bird food we put out, but they eat a lot and also block the birds from using the feeders, so I try not to let them stay too long. Getting them off the apple tree feeders can sometimes be a bit of a mission, because they feel quite safe there unless you walk pretty close to the tree, but because this station is so close to the house all I had to do to get the thief to flee was open the back door. And now that it’s out in the open, if I do decide that the squirrels are costing us too much in food and/or snapped feeder trays, I can always get R to spray some WD40 on the pole – which would certainly provide us, if not the squirrels, with some entertainment.