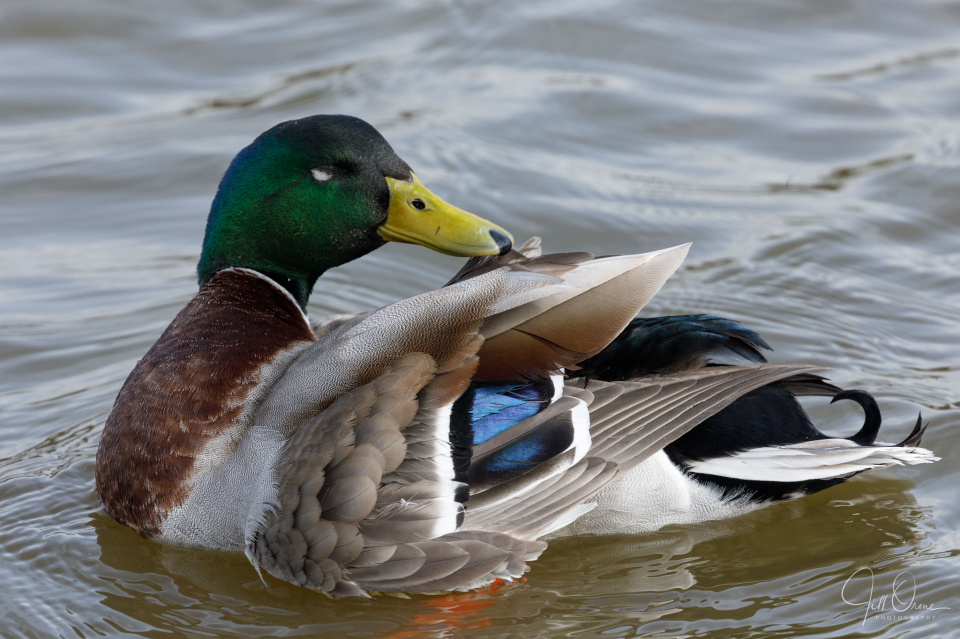 I do like a mallard, though they’re so common that I tend to take them for granted. If you’d asked me to describe the colouring of a male from memory, I’d have been able to come up with the iridescent green/blue head, the blue speculum, the white collar and the brown breast. I might have hazarded that the rest of the body and the wings are kind of sludge coloured, and that some of the feathers have white tips. But I wouldn’t have been able to describe this array of colours and patterns, or the fact that the black of the back and tail is also slightly iridescent.

Something else I’d never noticed before is the white patch of feathers below the eye – possibly because you rarely see mallards with their eyes shut. I did find a few photos on line though, so it’s not just a strange anomaly in this particular bird. If you look at my extra, taken a few seconds earlier when he was working on his speculum feathers, you can see that this patch disappears completely when the eye is open. I spent a while trying to find out if it has any known purpose, but sadly I failed to solve the mystery.

One thing I did find interesting in reading about this species is that it’s believed to have evolved rapidly, and in evolutionary terms quite recently, and because of this it’s still able to interbreed successfully with other species in the genus Anas. This is causing concerns in various parts of the world, where the integrity of other native species is thought to be under threat from hybridisation with mallards.

The mallard is also the ancestor of most domesticated ducks, and can still interbreed successfully with them, leading to ‘contamination’ of the mallard’s own gene pool. There are quite a few odd-coloured mallards on the Avon at Stratford which are presumably the result of mallard/feral domestic crosses; most of them start out green and brown but whiten over time, but R and I spent a while today watching a striking female that was largely black, including her bill, with just a small white bib. Neither of us had ever seen her – or another duck like her – before, and it was only her size and shape that convinced us she was definitely a mallard.