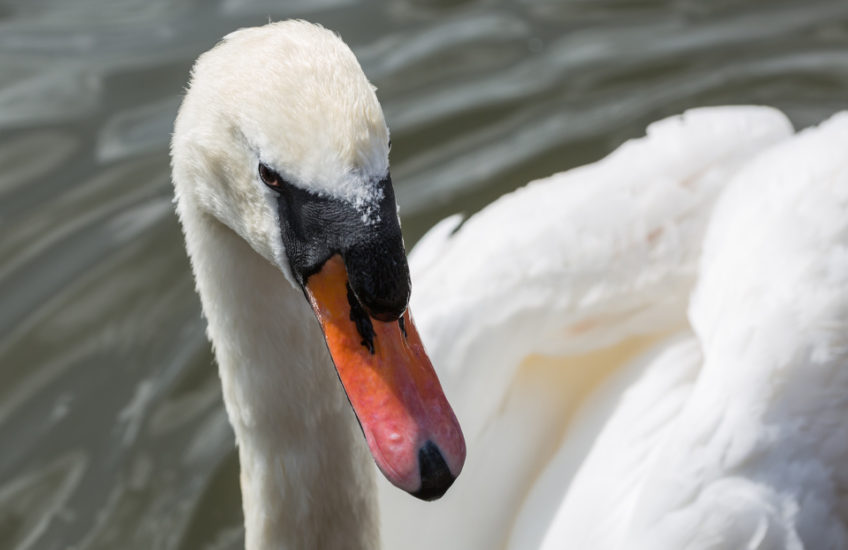 Number 53: capturing the look of extreme disapprobation in the eye of a mute swan, when he realises that the thing you’re holding isn’t edible.

By the way, if you’re thinking that “peevish” is a rather insulting word to apply to one of these graceful creatures, you might like to take a look at the extra. There was so much of that kind of behaviour happening on the Avon this morning that the surface of the river was liberally sprinkled with feathers.

I was feeling a little peevish myself, to be honest. R and I went up to Birmingham yesterday evening, to see Dixie Chicks in concert – it was a great gig, but I could have done with a lie-in this morning, and didn’t get one because I’d foolishly forgotten to pick up Arthur’s meds yesterday, and I needed to be at the vet’s to collect them at 8.30am so he didn’t have to go cold turkey over the Bank Holiday weekend. We also had a supermarket delivery arriving between 8.30 and 9.30, after which we needed to throw the hound in the car and take him off to Stratford for bathing and grooming.

At 7.45am the supermarket driver phoned to say he’d be 45 minutes late, if that was OK. I explained, nicely, that it wasn’t, and he said someone would call me back about it. The someone turned out to be him, calling my mobile while we were en route to Stratford, to tell me that he was now just 10 minutes away from our house. I explained that we were too, and he said again that someone would call me to rearrange the delivery. We picked up emergency supplies while we were out, just in case, then after we arrived home I got on with doing other things and forgot all about groceries. By the time I remembered it was mid-afternoon and no-one had called – so I called them, only to be told that the driver had returned our stuff to the depot as undelivered, but hadn’t asked for the delivery to be rebooked. “But,” said  the customer service person brightly, “we should be able to deliver it to you…. let me see…. tomorrow evening?”

I do try not to behave like the Middle-Class Housewife From Hell – for a start, I’m aware that it’s still quite the done thing in some circles for people to go out and fetch their own food – but when you’re paying for a service, I don’t think it’s too much to ask that there should be a system in place to deal with the occasional unavoidable glitch, without further intervention from the customer. Just saying.

On the plus side, I’ve already had an email detailing a credit against our next bill. And because the only food in the house right now is a loaf of bread, some slightly elderly cheese and Arthur’s beef mince, R and I will be going out for lunch tomorrow.