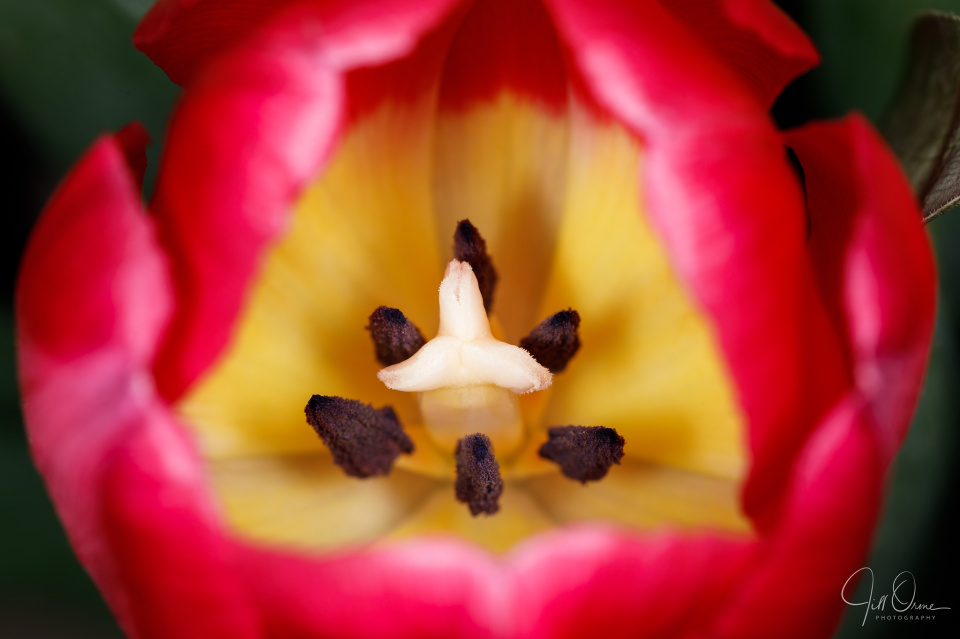 I was pushed for time today, caught between a heap of desk work I wanted to complete and an evening choir rehearsal. I’d hoped to make quick foray into the garden with the camera at some point in the day, but the heavy rain that lashed down through most of the hours of daylight put paid to that idea, so instead I reached for the macro, the ring flash, and the jug of pink tulips on the kitchen table.

I’m not wholly convinced about this image – it has… something, but I can’t decide exactly what that thing is, or if I like it, or not. It would have been easier on the eye if the colours had been a bit calmer, I think, but these are true to the subject. It does show the flower’s reproductive gubbins fairly well: six purple/grey male anthers, which produce pollen, surrounding the tri-lobed female stigma, which receives the pollen and feeds it down into the ovary beneath it.

Ever since I processed it the photo has been twitching at childhood memories, and I’ve just worked out that it’s partly the faint resemblance to a kaleidoscope image, and partly the fact that the colours put me in mind of pear drops. I don’t think I’ve eaten a pear drop since I was about 10 years old, but now I’ve started to think about them I can remember the taste and smell as though I last had some yesterday. Memory is a very strange thing.