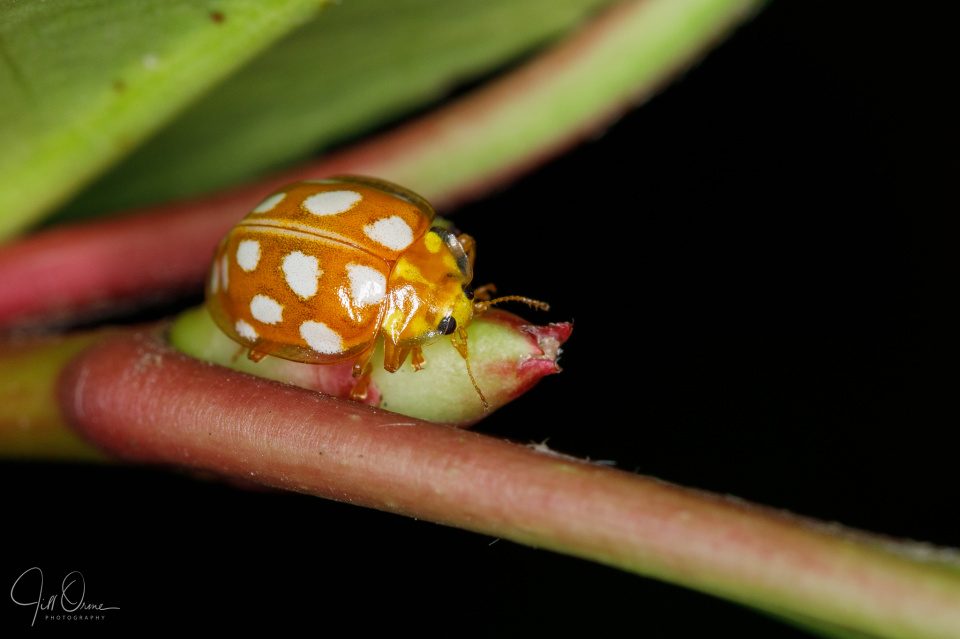 I was pretty pleased with myself when I found this orange ladybird on the photinia today. At least until I read the new edition of the Hawker – the journal of the British Dragonfly Society – and discovered that Common Darters were still turning up in Hampshire last week, and in Norfolk until just a couple of days ago. Please forgive the sound of grinding teeth…

Orange ladybirds are fairly small, at 5-6mm in length, but they’re absolutely unmistakeable. Nothing else has this combination of orange and yellow colouring, with twelve to sixteen paler spots, and – most distinctively, in my opinion – a translucent flanged edge to the pronotum and wing cases.

This used to be regarded as a species that was peculiar to ancient deciduous woodland, but in recent years it has either spread dramatically, or (more probably) it’s being better recorded, and it’s now regarded as common on broadleaved trees in many different situations, including gardens. It will take aphids, but prefers to feed on powdery mildews, and is generally described as mycophageous rather than predatory.

Adult orange ladybirds can live for up to a year in favourable conditions, overwintering in bark crevices, or in leaf litter during especially severe weather. They mate during the spring and summer, with batches of eggs being laid on the undersides of leaves. The larval and pupal stages are fairly rapid, and new adults appear from June onwards.