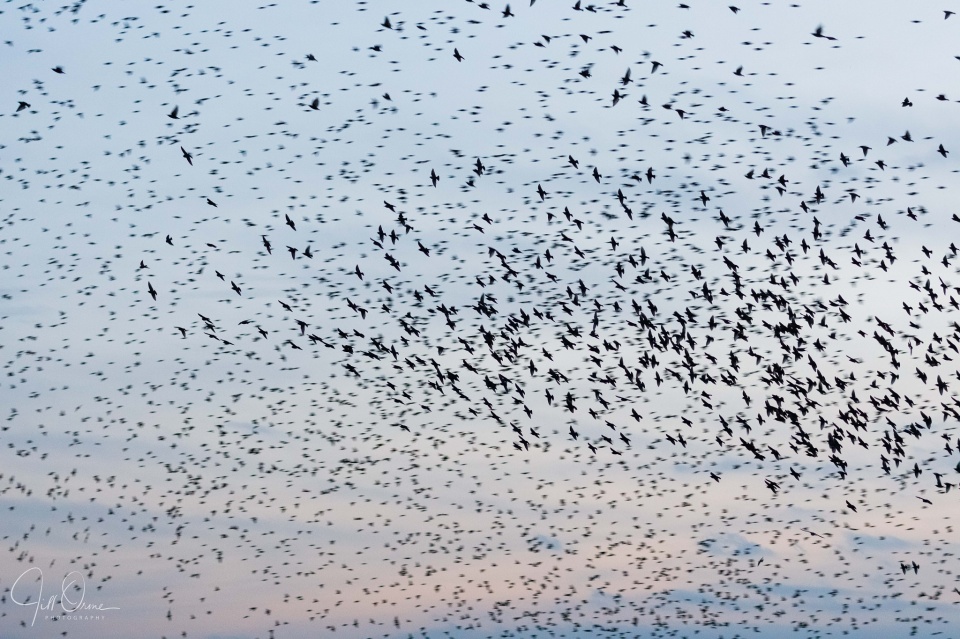 The current estimate of the number of starlings roosting in the reed beds at Ham Wall is around 100,000, and having stood in the midst of them and heard the noise they make, I’m not going to quibble with that figure. It’s hard to describe to you what it feels like to experience a murmuration here, but if I was allowed just one word I’d probably go for ‘immersive’ – which is the sense I’ve tried to convey in this image. Certainly it wasn’t like any other murmuration I’ve witnessed, in that (tonight, at least) there wasn’t much of the patterning we all love to see; instead, the birds came in in waves, from all quarters of the sky, and just poured themselves down into the reeds. And then, when some stretches of the reed bed got too crowded, lifted off en masse and moved somewhere else before settling again. It was extraordinary, and I feel very lucky to have been there.

I’m also happy that R was with me, having polished his superhero credentials a little brighter by insisting on driving me to Somerset today, just to save me doing the 200 mile round trip on my own. Having dropped me at Ham Wall at lunch time he went off to Glastonbury to do something “more interesting” (I ask you – what could be more interesting than watching birds??!), but arrived back in time to help me fulfil my Somerset errand, which involved a rendezvous in the car park and the transfer of property between us and our contacts, and probably looked quite seriously suspicious if anyone happened to be watching the encounter. They then left, and R and I walked through the reserve together to watch the starlings putting themselves to bed.

Even after ruthless culling I still have nearly 500 photos to deal with, and I daresay that one or two of the keepers will turn up on my Facebook page over the next few days. But for now I’ve posted two of the highlights of my day: a great white egret showing off its general gorgeousness to a rather grumpy-looking grey heron, and a marsh harrier, which I happened to catch making a banking turn as it quartered one of the reed beds in search of prey. I’m not sure if the marsh harrier is a female or a juvenile (the markings being very similar), but I think the pale mask gives it a particularly sinister air – contrasting rather oddly with its primly tucked feet. The great white egret was just one of several that I saw around the reserve today, which was notable because these lovely herons are still rare enough in the UK to be the subject of birding alerts; they’re definitely not a rarity at Ham Wall though, so If they’re on your target list I recommend that you take a trip to Somerset.