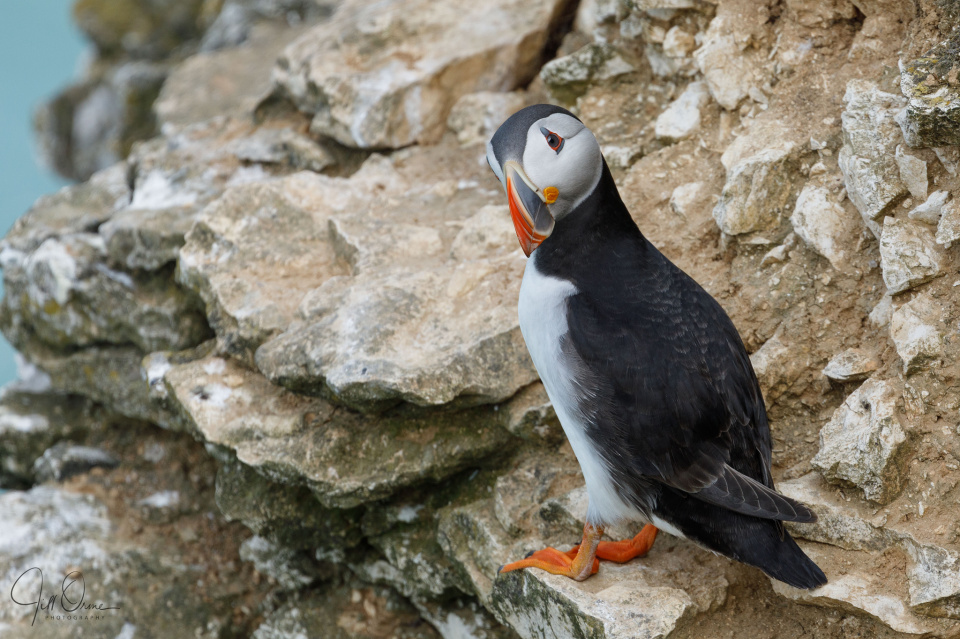 “If you’d gone any further forward,” said R, “I was getting ready to grab hold of your camera strap. At least then when you fell off the cliff, I’d still have had your camera.”

When he’d agreed to come to Bempton Cliffs with me I promised him there would be puffins. By lunch time today I’d been able to introduce him to gannets, fulmars, and kittiWAAAAKEs, none of which he’d ever encountered before; he’d reacquainted himself with razorbills and guillemots, which he last met on Skomer three years ago; and we’d had the pleasure of watching a barn owl quartering a wild flower meadow in search of prey. Puffins, though, were in short supply. Another visitor pointed out a couple of them to us, but they were a long way away, and when you’ve encountered them at ridiculously close quarters on Skomer, seeing one at fifty metres distance through binoculars isn’t especially exciting.

R said he didn’t mind though, because he’d be able to dine out for ever on the fact that I’d enticed him half way across the country via false promises. He was already working up his nuffin’ material by the time we moved off the main section of the reserve, which is well fenced and feels extremely safe, and began walking along the open cliff-top in the direction of Flamborough Head – which isn’t, and doesn’t.

There was a period in my life when I suffered from debilitating vertigo and wouldn’t have been able to do this walk at all, and even now my stomach swoops and my hamstrings clench involuntarily when I allow myself to contemplate a three hundred foot drop into the sea (and especially when I see someone sitting on the edge of that drop, and leaning forward to photograph the birds underneath them), so I was careful to make sure that I was several yards back from any possibility of stepping off into space, and I spent at least as much time watching where I was putting my feet as I did looking around me at the view and the birds. I don’t even know what it was about this particular spot that made me step cautiously forward onto an area of grass that had already been trampled by other people, and lean gently outwards…. but I was very glad I had, because just a few few feet below me was this puffin, and I was able to step back and say triumphantly to R, “Go and stand exactly where I was, and look over the edge!”

I don’t know quite what it is about puffins that’s so endearing, but they’re the most addictive of birds, and I’m delighted that we finally got to enjoy this brief encounter. And puffins aside, R thoroughly enjoyed our visit to Bempton Cliffs, and says that he’d be happy to make a return trip at some point, which makes this a highly successful day.