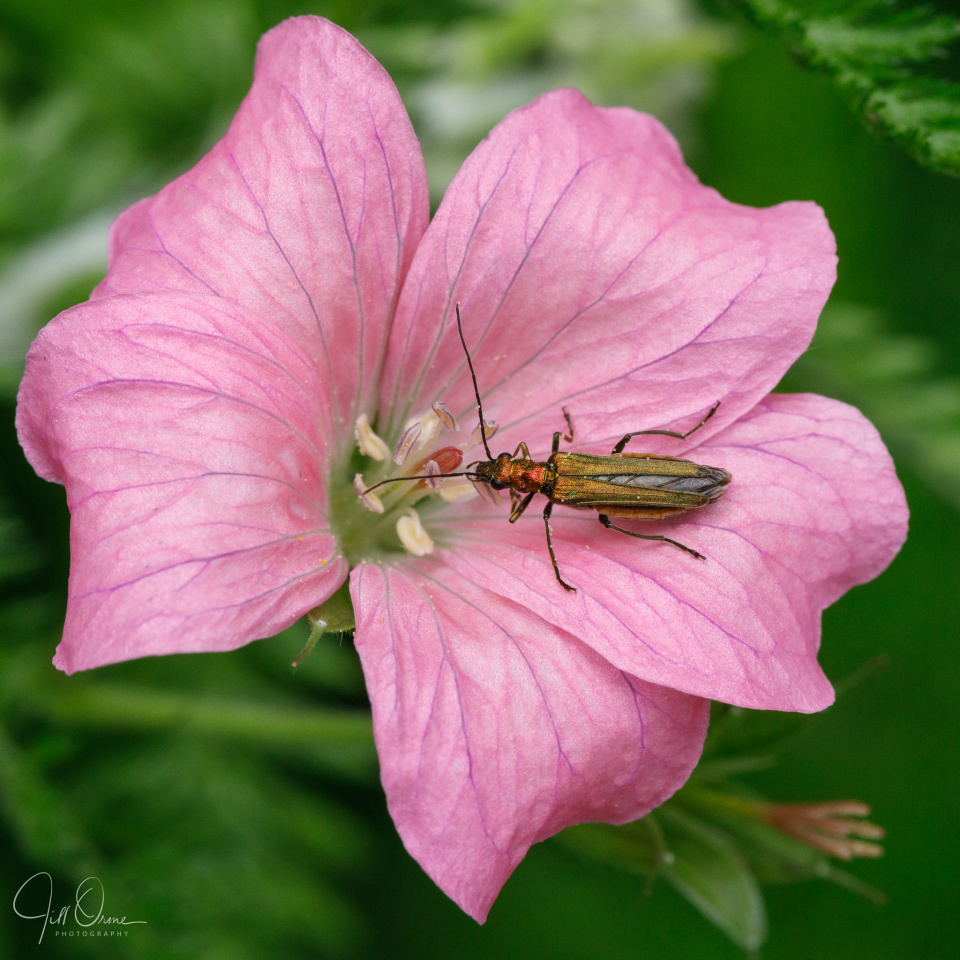 This is a thick-legged flower beetle (Oedemera nobilis), though being a female and keeping herself in trim she doesn’t have the thunder thighs that readily identify males of the species, and give it its common name. She’s also a more coppery colour than most of the males I see, which tend to be a deep metallic green, but I’m not in any doubt about the identification, because of her general shape, and the fact that her wing cases taper from the shoulders and don’t fully cover her wings.

Oedemera nobilis is a sun-loving beetle, and is most common in southern Europe and north Africa. Over the past few decades it has spread steadily northwards, but it’s not found in eastern Europe or Scandinavia, and in the UK it’s mostly concentrated in southern England and Wales. I’ve sometimes seen it referred to as a false oil beetle or false blister beetle, which is confusing because in the UK we have very few oil beetles and O. nobilis is really nothing like any of them, but in other parts of the world oil beetles can be a nuisance to humans, and it seems that there are members of the Oedemeridae family that can be mistaken for them.

Thick-legged flower beetles are pollen feeders and visit a wide variety of plants, though they’re especially fond of ox-eye daisies and umbellifers. Because they pick up pollen and transfer it around as they flit from flower to flower, these beetles are regarded as excellent pollinators; if you have time to view the image full-screen, you’ll see that this female is dusted with pollen grains. I was amused to read in one source that although the maturation period for females is quite short, they won’t mate until they have eaten – and really, who can blame them? This one clearly has eaten, and mated, because the bulge of her abdomen says that she’s gravid with eggs, which she will lay on the stems of plants such as thistles or broom.