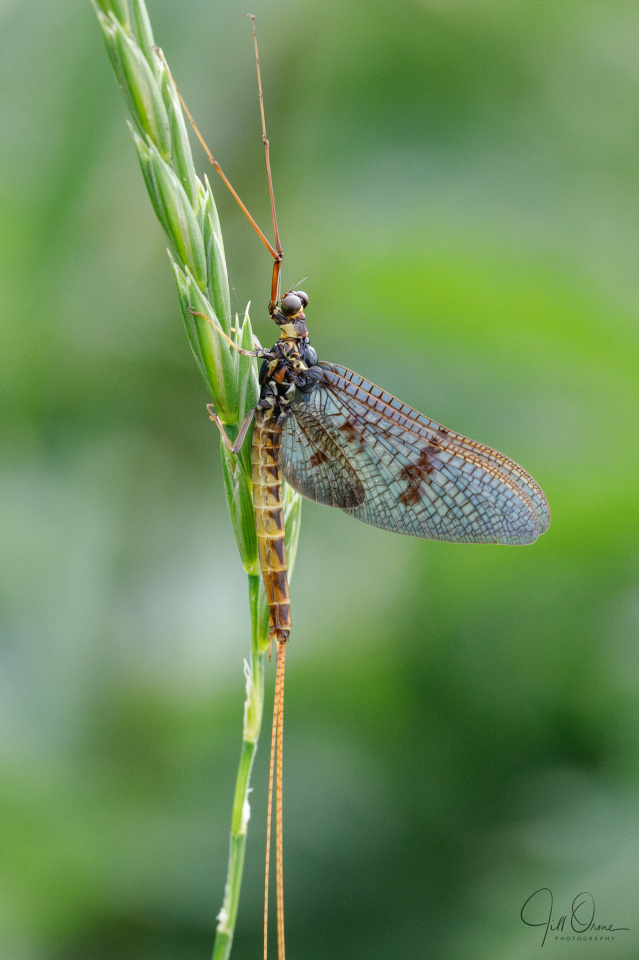 When I my car went through its MOT last month it came back with an advisory notice that one of the tyres was approaching the legal tread limit, so this afternoon I went into Stratford to have a new tyre fitted, did a little clothes shopping for Baby B, and then went for a walk along the river bank in search of invertebrates. My best Odonata capture was the White-legged Damselfly below, and he might well have made the top spot tonight if this Mayfly hadn’t also posed so nicely. 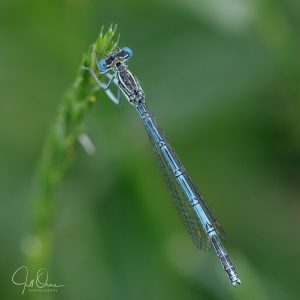 We have around fifty species of Mayfly in the UK, and I don’t pretend any expertise when it comes to identifying them, but given its size and colouring, the shape and patterning of the wings, and especially the triangular spots along its abdomen, I think that this is Ephemera vulgata, which is a species of ponds, lakes, and slow-flowing rivers. Its nymphs develop in sediment and usually take two years to reach maturity, after which the sub-adults emerge, undergo their final moult, and are then on the wing for just a few days. The males perform a courtship “dance” in which a swarm of them fly up and down in a kind of pogo motion, and the females fly through the swarm in order to be caught and inseminated. The females then fly over the water and repeatedly dip the ends of their abdomens to release their fertilised eggs.

Ephemera vulgata is said to be in decline, most probably because of aquatic pollution affecting the nymphs. The swarm I saw today didn’t seem to contain many Mayflies, but I don’t know what would be considered normal on this stretch of the Avon on the last day of June. I don’t think the numbers were helped by the presence of a patrolling male Emperor dragonfly, which repeatedly veered into the swarm and picked off individuals; usually it ate its prey on the wing, but on one occasion it flew past me with a huge mouthful which I think must have been a pair of flies, which it landed (sadly out of range of my lens) to eat.

On the subject of predation – and with a warning that the photo is a little gruesome – I’ve posted an image to my Facebook page of a Large Red Damselfly that chose its emergence perch badly at our patio pond this morning, and was caught, killed, and dismembered by ants. This made me rather sad, as you’d expect, but there were also eight successful emergences – two Azure Damselflies and six Large Reds – so the balance of news from that tiny pond is good rather than bad.