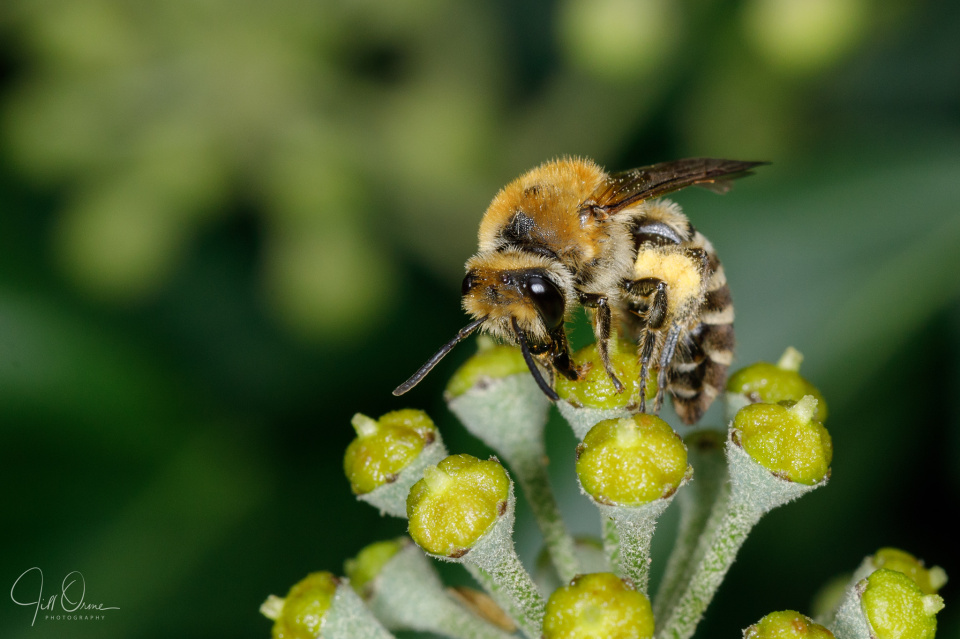 They say you shouldn’t lunch at your desk, but this female ivy bee was managing to combine business with pleasure at lunch time today, collecting pollen to provision her nest cells while feeding on the ivy nectar. The hedgerow where I took this photo was so laden with bees, wasps, and flies (various) that it was quite hard to isolate a single diner to photograph, and it almost made me want to taste the ivy nectar myself, to find out if I thought it was as delicious as all these invertebrates clearly did. Though I wasn’t going to, obviously, having a very good idea whose feet and tongues had already been all over the flowers.

Standing close to the hedge, with insects buzzing drunkenly all around me, I suddenly remembered walking the children to and from their first school, round about a quarter of a century ago, and having to pass a cottage with a luxurious expanse of flowering ivy draped along the garden wall. Every day through the first half of the autumn term I would gather them close to me and scuttle past, scared that the bees and wasps – my generic term for most buzzing insects back then – might turn on us and sting us. Now I know better in any number of ways, one of which is most of the insects you generally find on an ivy hedge can’t sting at all, and another is that even the potential stingers would be highly unlikely to waste good feasting time in attacking an unimportant human, unless you tried to separate them from their meal.

Having said that, some insects can be unpredictable. One summer’s day when Child Two was about three years old, he became very agitated about a wasp that had come in through the open back door and was flying around the kitchen. I calmly and confidently assured him that it wouldn’t attack him if he left it alone, only to suffer an immediate and permanent loss of credibility when it waltzed over and stung him – apparently just out of spite. He hasn’t trusted wasps – or me – since that day, and I have to say that I still hold a bit of a grudge towards the Vespula species myself.