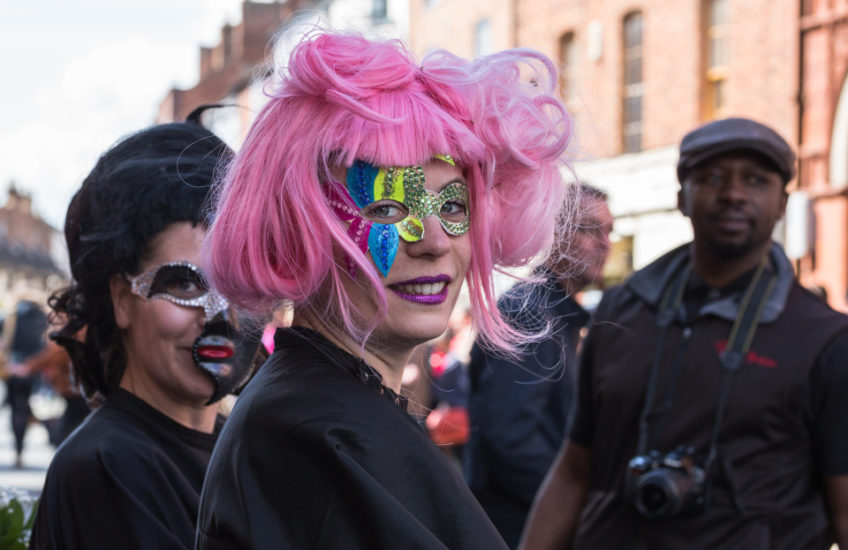 Today I braved part of Stratford-upon-Avon’s Shakespeare 400 celebration. Or “Hell on a Stick” as I prefer to think of it.

I don’t really care for crowds. No, sorry – I’ll come in again. I don’t care for crowds at all. I certainly don’t care for crowds in which people say “Excuse me – may I just get past you?”, and then when you squeeze yourself into half your previously allotted space in order to let them through to wherever it is they’re trying to go, you discover that where they’re trying to go is directly in front of you with their head in your lens. In the end I became quite assertive, and discovered that being tall (and able to produce a fairly ferocious scowl) has its uses. On the up side, a sort of Blitz spirit took hold of my particular section of crowd, when we realised jointly and severally that we were going to have to defend our little patch of pavement if we wanted to see the parade at all: by the time it finished we’d spent so long standing firmly shoulder to shoulder that we were almost on Christmas card terms.

These women appeared right by us part way through the parade and stayed there till a Louisiana jazz band went through, after which I realised they had gone. Despite the weird wigs and home-made masks they were quite lovely, which is why I’ve chosen to blip them. They also put me in mind of the masked ball in Much Ado About Nothing, so I’m going to tag this for the Shakespeare400 challenge being run by hildasrose. After the parade had gone through, the press of people eased and I wandered around for another couple of hours, just looking for interesting sights. I did however stop short of trying to persuade people to be interesting, which is more than I can say for some of the film crews which were out in force around the town! I’ve created an album of some of my shots on my Facebook page, which you can access via this link.

Round about lunch time I was on the riverside terrace of the Royal Shakespeare Theatre having a coffee and watching the world go by, when a pair of swans began their courting ritual out on the river. It was quite fascinating to see them almost dancing together, and very touching that after they had mated they did a further dance which I guess must seal the bond between them. At this point a voice close to me said “Oh look – they’re kissing!” – which is pretty much what it looked like. As well as plenty of human attention from the bank they also came under the scrutiny of a lone male swan, which appeared to be incensed by their activity – though his main intervention (even though it did make me think of star-crossed lovers) can only be described as too little, too late. I was using my 90mm macro, which wasn’t nearly powerful enough to get good photos at that distance, but I couldn’t resist taking a set anyway because I may never see this sight again. Those shots have gone into a separate album here.

I’m away now to try to sleep off today’s surfeit of coffee and cake, as I’m going to London first thing to do the Complete Walk and brag shamelessly to complete strangers about Child One’s contribution to it.