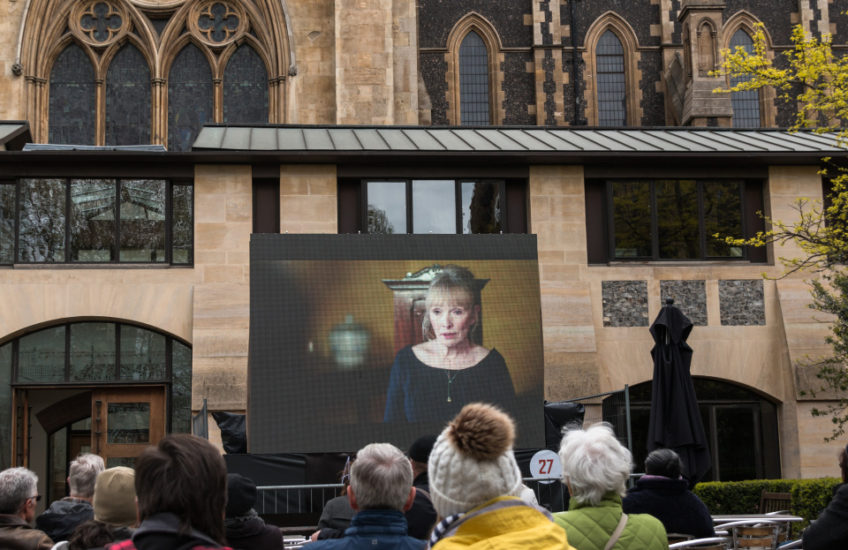 When R went to London to do The Complete Walk yesterday he ended up having a somewhat torrid time: they were having technical difficulties with some of the big screens, and not all of the films were showing. Child One had given him a list of her favourites out of the thirty seven, and he ended up doing the walk several times, in hopes that the gremlins would be expelled in time for some of the films he’d been hoping to see to start playing. By the time he arrived home he was toadally zorsted, poor man.

I was luckier today: apart from a couple of broken areas in the screen showing Henry V, all was working – so I was able to do the Walk as intended, starting in the garden of St Thomas’ Hospital with The Two Gentlemen of Verona (Shakespeare’s first play), and ending by Tower Bridge with The Tempest. It was an extraordinary experience, and I felt quite emotional to be doing it in the part of London Shakespeare knew best – though of course essentially nothing remains of the streets and buildings he would have known.

I was also rather overwhelmed by L’s involvement with this project, as you’ll no doubt understand. Strangely, after the first time of seeing her name on the credits for Animation Direction I very quickly got used to it appearing at the end of every film, and rather than that, or even her actual animation work, the thing that struck me over and over again was that all of the titles, both on film and on the physical banners identifying each screen, and some of the continuity links within the films, were in her handwriting. I suppose it’s because handwriting is so personal and I’ve known hers for so many years that it brought a tear to my eye a couple of times.

There were some amazing performances among the films – too many really for me to list, but Peter Capaldi as Titus Andronicus was extraordinary, as was James Norton as Richard II, Dominic West as Coriolanus, and all four actors (including Alex Jennings and the wonderful Michelle Terry) rotating the role of Hamlet. Nikki Amuka-Bird and David Caves sparked beautifully off each other in A Midsummer Night’s Dream, and so did Lindsay Duncan and Ruth Wilson in All’s Well That Ends Well, shown in the Millennium Courtyard of Southwark Cathedral – and it’s Lindsay Duncan you can see in my blip.

The worst part of the day was that it was bitterly, punishingly cold, which did take some of the enjoyment from the experience – I compensated by drinking far too much coffee and eating only inappropriate foodstuffs, and I’m now pink in the face and vibrating slightly. I believe that the films may be shown in other venues, and there is also a rumour of a possible television screening – if you get the chance to see them in something more hospitable than a 20mph northerly wind with a windchill of 3º, I do most strongly recommend that you seize the opportunity! For now, you might like to take a look at a half hour programme on the project which was shown on the BBC yesterday.