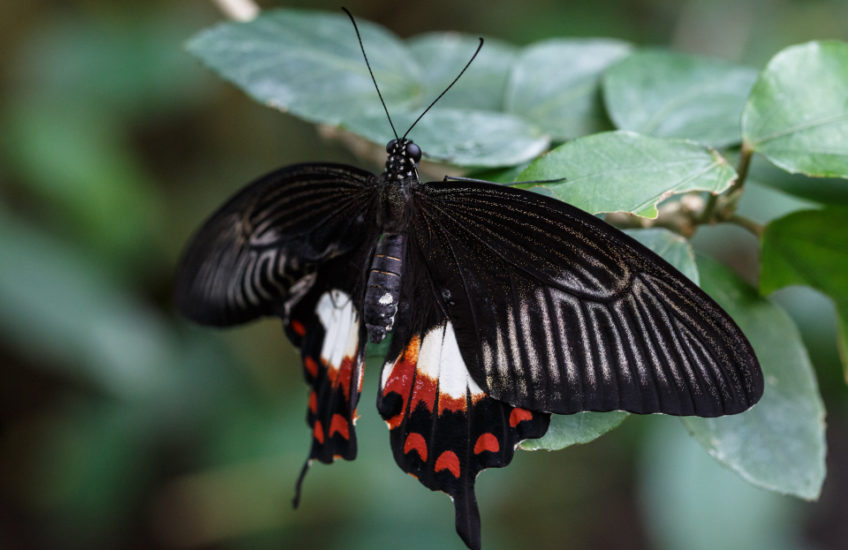 After several days when it never seemed to get properly light, today was bright and sunny, though cold. I had to go to the bank in Stratford, and I thought I should take advantage of the better light and pay a visit to the Butterfly Farm too, making sure to be there when everyone else was likely to be at lunch.

Every time I go to the Butterfly Farm some species seem to be particularly plentiful, while others are difficult to find – I suppose because they each have a slightly different length of breeding cycle. Today there were hardly any Clearwings or Owls, but large numbers of Mormons and other Swallowtails. This is a Common Mormon, Papilio polytes, an Asian species with three distinct female forms, each of which mimics a different inedible butterfly. My tropical butterfly identification skills aren’t what they might be, but I think this individual is the form known as stichius, which mimics the Common Rose – the very obvious difference being the colour of the body, which is always black in the Mormons.

After an hour in the Butterfly Farm, some shopping and a quick cup of coffee, I zoomed over to Beckford, near Tewkesbury, to drop off some old newspapers at the Vale Wildlife Hospital; they use newsprint as bedding for hedgehogs, and as they’re currently caring for over 200 sick, injured and orphaned hedgehogs, with more being admitted daily, they’re going through a vast quantity of the stuff. I then meandered back home via Broadway, which was looking lovely in the dusk with all its shops decorated and lit for Christmas – but I resisted the temptation to get the camera out again because I knew that I already faced several hours of butterfly photo processing.