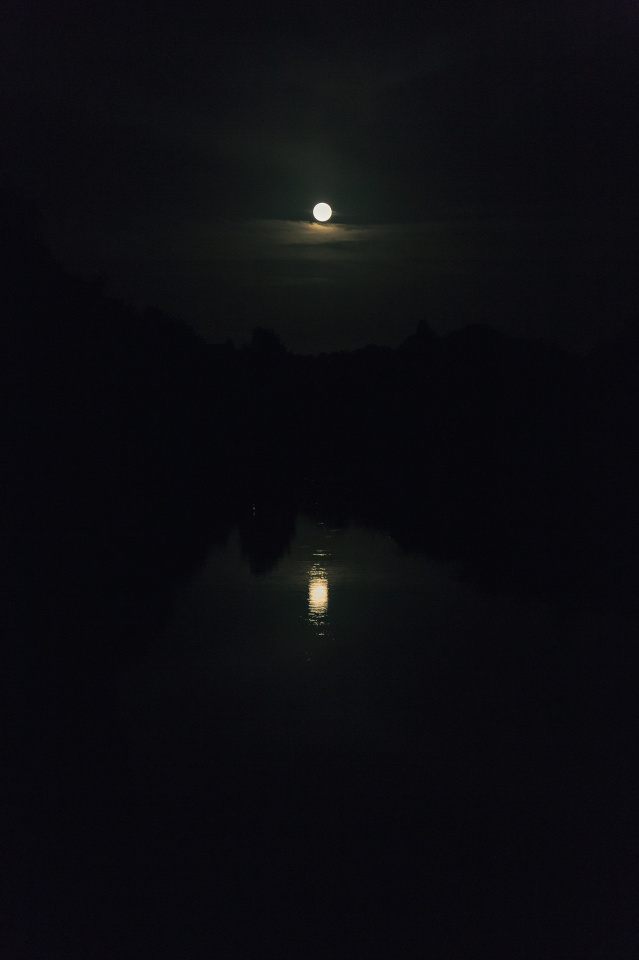 There’s been a lot of buzz for the past couple of days about this weekend’s full moon (which being the full moon after the autumn equinox is called the Hunter’s moon) coinciding with a supermoon and therefore appearing especially large and bright. It heaved with rain from dusk yesterday through to breakfast time today, striking moon hunting off last night’s agenda; but this afternoon was bright and sunny, so I was hopeful that I’d be able to get some photos this evening.

I consulted the Photographer’s Ephemeris, which told me that moon rise today would be at 18.46, but as there was a bank of cloud along the eastern horizon I knew I’d be lucky to see it much before 7pm. Just before 7 I took both cameras and drove up out of the valley to the nearest vantage point, from which I got a lovely view of the large, orange moon as it cleared the cloud. I knew from past experience that it would appear less and less spectacular the higher it rose, so I hastened to bank a few long lens shots – all of which I’ve now deleted, because they simply weren’t sharp.

The next time I say that I’m going off out to photograph the moon, but no, I don’t think I’ll bother taking a tripod with me, please would someone point out that I’m an idiot? Many thanks.

Secure in the mistaken belief that I had what I needed, I then went on a little road trip to identify other vantage points for future use, and round about 7.30 I wound up at Bidford Bridge. The moon was back behind another cloud at this point, and I was standing in one of the refuges in the middle of the bridge waiting for it to reach clear sky again, with both cameras and a sign saying Please mug me hanging round my neck, when a little cough just behind me almost propelled me over the parapet into the Avon. I spun round, and the man who was standing there said (quite apologetically), “If you go two further along, you’ll catch it reflected in the water.”

I thanked him with all the enthusiasm that usually accompanies having severely misjudged someone, and scuttled through the traffic to the refuge he’d pointed out, from where I took both this shot and the extra. Interestingly, both were taken at 70mm – the main image with the 24-70 on the 5DIII, and the extra with the 70-300 on the 70D – and neither is cropped, which shows quite neatly the difference in field of view between the full-frame and the crop-sensor. 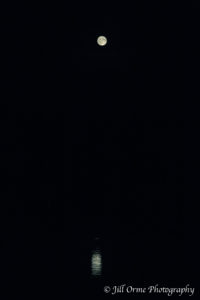 The next time there’s an unusual moon and a promising sky I’ll probably head straight to Bidford to try to catch moon rise from the bridge, though I’m not sure whether there would be room for me, a tripod and a large lens in the refuge. I may have to risk bending over so I can rest my elbows on the parapet wall, and just hope that my ample backside waving nonchalantly at the traffic doesn’t trigger some kind of road rage incident. I’ve never yet been on the Midlands news, and if possible I’d prefer to keep that record intact.