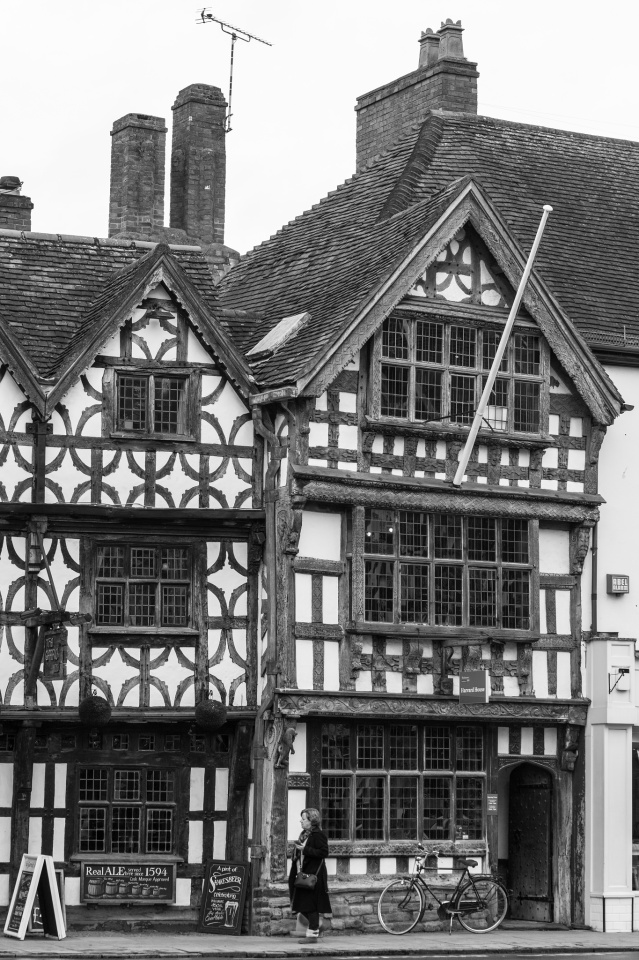 When I read the theme for this week’s Mono Monday it was an easy decision to photograph some of the traditional buildings in Stratford-upon-Avon – a town which trades enthusiastically on its traditions, and where, to be fair, a Georgian property in the middle of the High Street looks like modern infill.

Here you see on the right Harvard House, built in the late C16th by the grandfather of John Harvard, founder of the Ivy League university; and to the left part of the Garrick Inn, which claims to be the oldest pub in Stratford (though that is disputed by The Old Thatch Tavern). Harvard House is currently open to the public while Nash’s House, another Shakespeare Birthplace Trust property further along the road, is closed for conservation and supposed upgrading of the “visitor experience”.

In case you don’t know Stratford High Street I’ve put in an extra which shows these two buildings in context. 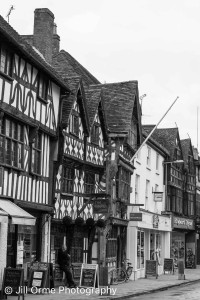 I’m not sure about the closest building to the camera, which currently houses a Thai restaurant called The Giggling Squid – it looks old, but I haven’t been able to find it mentioned anywhere and I wouldn’t want to commit myself to stating that it is, because there’s also some quite deceptive mock-Tudor architecture in the town. Then you have The Garrick and Harvard House; then some upstart Regency place which is currently a waffle restaurant; and then two other interesting frontages peering mournfully over the unlovely facades of Robert Dyas the ironmonger and (only just visible) Currys the electrical goods merchant.

The difficulty of telling with certainty which Stratford buildings date from when is pretty nicely illustrated by the second extra photo, which is of the opposite side of the High Street. 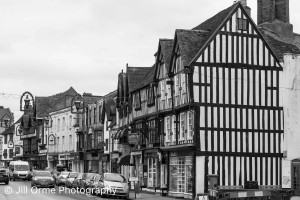 The three large buildings at the near end of the street are Tudor; then there are three small ones crammed in randomly, which I think are probably of a similar age. Beyond that there are two large frontages which I would say are Regency, though what those odd bay windows are about on the first floor of the brick one, I really couldn’t say. Just when you thought we were getting back to properly old stuff: the next two are mock-Tudor. Then there’s another that’s probably Georgian, before you reach the last building on the block, which looks as though it might have been built in the mid-C20th but is actually one of the oldest houses in the town. If you’re interested in knowing more about the old buildings of Stratford, this would be a good place to start reading.

I was very happy this afternoon to read a post by the Blipfuture team, who have been able to lower the fundraising target following their negotiations with the site’s current owners. I don’t think that anyone is yet breaking open the champagne, but if things continue to move as they have been doing it looks as though the community buyout of Blipfoto will go ahead. My thanks to the team for their hard work, and my congratulations on getting us to this point. In recognition of my own commitment to the community, I’ve increased my personal pledge.