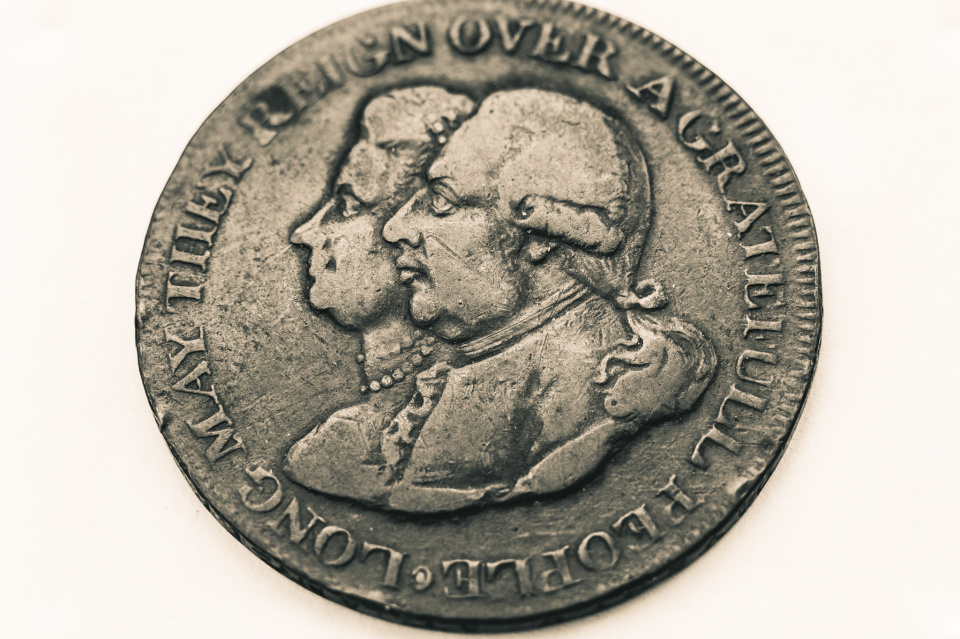 This might look like a coin, but in fact it was never legal tender; however in their day tokens like this changed hands freely as a form of money.

In the second half of the C18th Britain suffered from significant inflation, and also from a mounting  shortage of silver, the metal from which most small-denomination coins were made. Knowing that the population would object if these already small coins were made even smaller, the Government simply stopped minting any. This of course led to a drop in the number of coins in circulation, especially outside large commercial centres – and the problem was made yet worse by the fact that large quantities of legal coins were melted down by criminals and recast as lighter counterfeits. So not only was there a shortage of coins, but there was a general lack of trust in the coinage.

In 1785 the Parys Mining Company of Anglesey proposed that they should be allowed to mint copper coins with edge milling to deter counterfeiters, but the Government rebuffed the offer – so two years later they began making their own tokens, and using them to pay their workers. The tokens were of a consistent size and quality, and rapidly became a trusted form of currency, with manufacturers in a number of cities minting their own designs. 95% of the tokens minted were halfpennies, and most of the rest pennies and farthings. A wide range of decorative designs appeared over the next decade, with producers using the tokens to mark special events or honour national figures, or even to make political statements.

Because so many designs were in circulation, from quite early on it became fashionable among people who could afford it to collect tokens, and some manufacturers began cashing in on the craze by creating special editions for the collecting market. One early collector was a man called James Conder, who compiled the first catalogue of the tokens; for which reason they’re now commonly called Conder tokens.

This particular token was probably minted in London; as well as the busts of King George III and Queen Charlotte on the obverse, it has a man-of-war on the reverse, and around the edge it says “PAYABLE AT ANGLESEY LONDON AND LIVERPOOL”, along with a small design which I think might be a maker’s mark. I haven’t been able to date it, but the design seems to tie in with the national anxiety of the early 1790s about events in France, and the possibility of a French invasion of Great Britain.

In 1797 the Government began issuing legal copper coins (slightly ironically, the contract to produce them was given to Matthew Boulton, whose Birmingham factory had turned out millions of tokens over the previous decade), and though these legal coins were massive and heavy, gradually the demand for tokens waned. They were declared illegal in 1817.

If the technicalities are of interest to you, this is a 12-layer focus stack. I slightly misjudged my angle and ran out of focus before I could get the top of the coin sharp, but it still has much more detail than my single image shots of the token, even the ones I took from directly overhead. After combining the layers in Photoshop I used a split-tone mono preset in Lightroom, and then pulled up the yellow to reflect the fact that it’s a copper token.