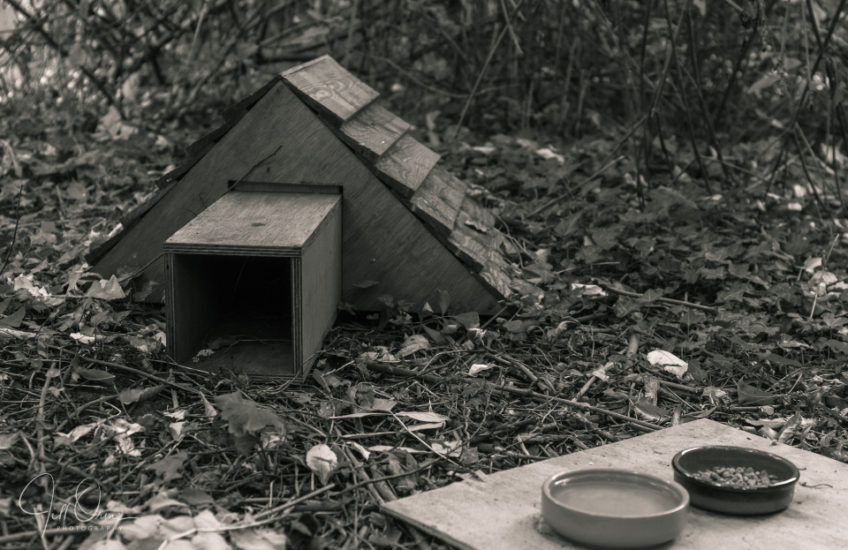 As I’ve talked about it a few times, I thought you might like to see the hedgehog house – or hoggery, as I now tend to call it. The entrance is designed as a tunnel to help keep weather out – and also, I suspect, to make it harder for larger mammals to work their way inside, or get at the occupants. The bits of foliage that have been dragged into the tunnel show that it’s being used – though, to be fair, I can’t really tell by what. Before we put the hedgehogs into the house for the first time we stuffed in quite a lot of hay, which they seem to like to pull across the inner end of the tunnel when they’re in residence.

Now that the weather is getting colder I put out some cat kibble every day, though not usually until dusk – I did it early today because of taking this photo. Each night the food disappears – though again, I can’t tell what’s eating it; but I checked the bowl at dusk today and it was still full, which suggests that at least it’s not the next-door cats who’ve been helping themselves to it. But judging by the regular appearance in the garden of substantial droppings, we seem to have developed a bit of a badger problem over the last few weeks; we don’t have anything that looks like a sett, but it’s quite possible that one or more badgers from elsewhere in the village wander in each night and help themselves to the hog food. This is slightly worrying, because apart from human motorists and Jack Russell terriers, badgers are one of the few serious enemies of the hedgehog, so I’ve closed the garden gate this evening in the hope of keeping them out and giving the hogs free run of their territory and of the food.