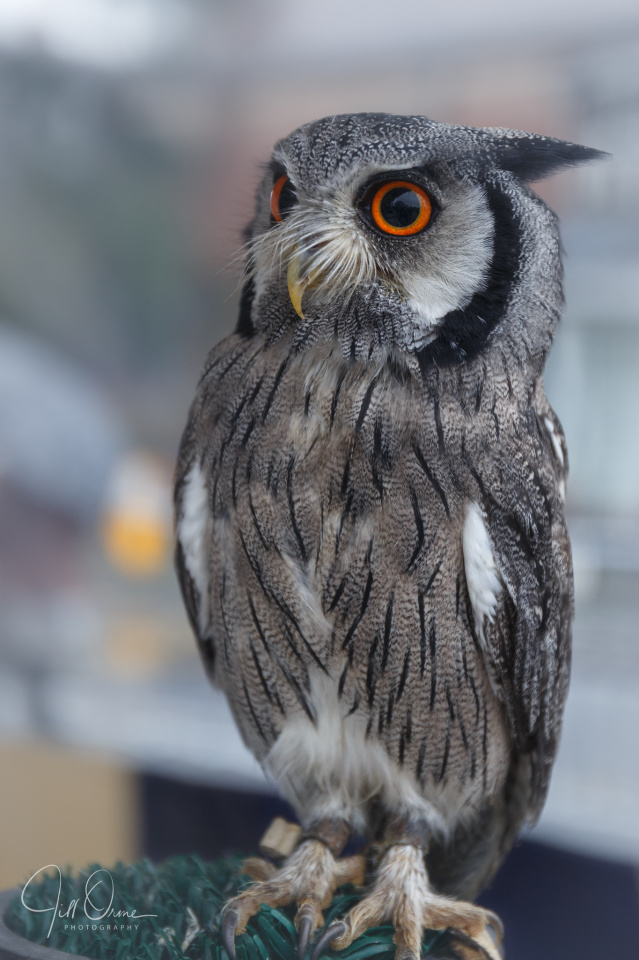 R and I were supposed to be having lunch today with my sister and her lovely family, but K needed to have an emergency wisdom tooth extraction yesterday, and by last night she was feeling mouldy enough that we thought it best to reschedule our date. So, left at a bit of a loose end, R and took ourselves off to Stratford this morning for a slap-up breakfast at Boston Tea Party.

On the way back to the car through the drizzle, I was happy to see that the Midlands Birds of Prey Rescue had their occasional fund-raising stall at the market on Waterside. I’ve blipped their owls a couple of times before, but as far as I’m concerned, you can never have too many owls – and I’m always happy to have the opportunity to give them some money. This is a closed rescue – in fact, having had break-ins and thefts in the past, they go out of their way not to publicise their whereabouts – but they need funds to support the birds they keep in captivity (often surrendered to them by people who bought them but then found they couldn’t care for them properly), as well as their work in rescuing injured raptors of all kinds and rehabilitating them for release. Happily, I think the Stratford gig is probably a lucrative one for them: all the time I was taking my photos I could hear money clunking into the buckets as one person after another came up to take some shots.

This startled-looking chap is Charlie, a 5 year old Southern White-faced Scops Owl. He’s normally quite relaxed and passive on the stall, but this morning he wasn’t happy, and kept turning his back on the public and having to be coaxed back round to face the world. He then spotted something on the canopy of the marquee that he seemed to think was a monster of some kind, which is why he had this face on. The young woman in charge today said that it’s not unusual for all the owls to be a bit edgy in the morning, and she expected them to settle down as the day wore on.

The extra today is a photo of Princess, an eleven year old European Eagle Owl. This is the largest species of owl in the world, standing around half a metre tall and with a wing span of nearly two metres, and they can do quite a lot of damage with their enormous talons if they choose to, but although Princess didn’t seem to be enormously thrilled with all the cameras and phones either, she remained completely calm. 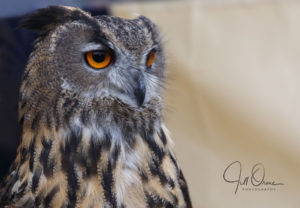