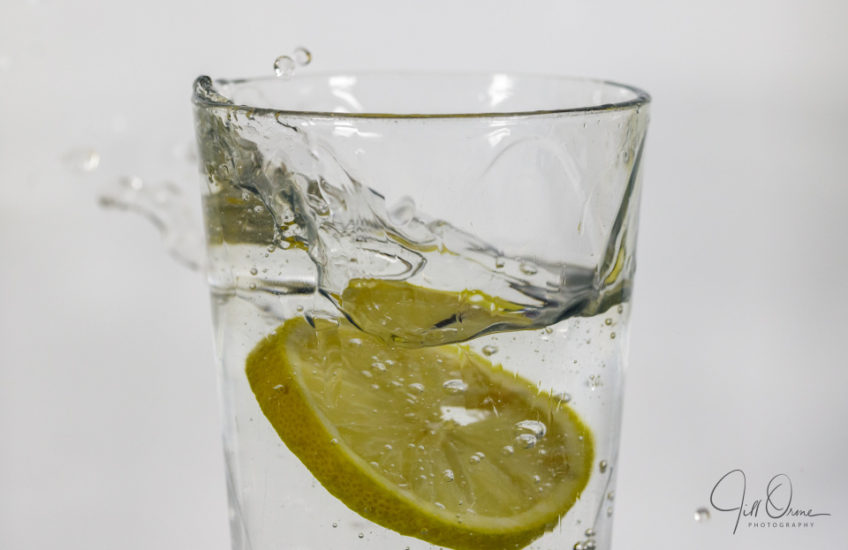 A pretty boring day of doing mostly useful but desk-bound things, while looking out of the window at some very unenticing weather. I wanted to avoid the situation I found myself in yesterday, when I didn’t pick up the camera till after 10pm, and then had to madly scramble together a composition (though on the plus side, the lateness of the hour did discourage me from taking a gazillion photos) – so towards the end of the afternoon I started looking around for something to photograph. I was toying with the idea of trying to take a very thin slice of a piece of fruit to shoot on the light pad, when I remembered that it was some while since I’d done messy play, and decided to take a thick slice instead, and drop it into a glass of liquid.

In the interests of journalistic integrity I should state that despite the title this is not tonic, and contains no gin – I can’t abide the smell of gin, and R would, I suspect be unamused if I wasted his for a photograph. But I did want it to be bubbly, so I opened a bottle of lemonade for the project – and used quite a lot, partly because I was splashing it round the kitchen, and partly because when you keep throwing something into it and then fishing it back out again, the lemonade goes flat very quickly and you have to replace it.

Is this a competition worthy-shot? No.
Was it a sensible use of half an hour? No.
Am I sticky right up to the fetlocks? Umm, yes.
Was it fun? Well, what do you think….?!