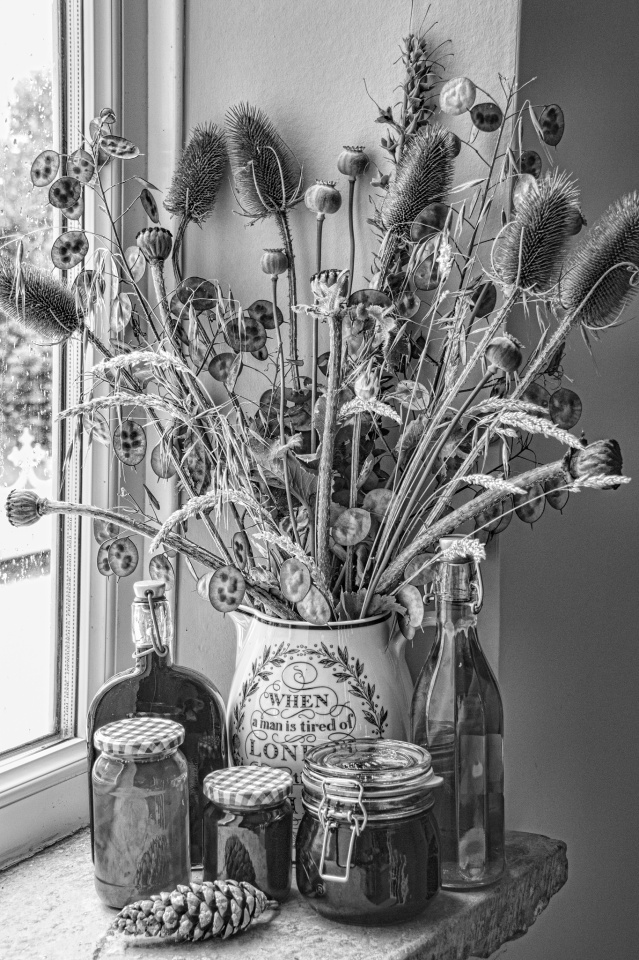 My mother hated autumn. She saw it as a slide towards death and decay, and every year it made her depressed. I, having a very different disposition (and being lazier than she was) view it as a time of rest and consolidation. I like the fact that while the tops of herbaceous perennials die back their roots are making new growth, so that they can flourish again in the spring. And if I’m honest I like the fact that the garden can be tidied in the autum and then essentially left to its own devices until next year.

Each summer and autumn I harvest some of the fruits and vegetables from the garden and the nearby hedgerows and preserve them for eating and drinking through the dark months of the year. Jams and chutneys, dulce de membrillo, sloe gin and rhubarb schnapps all make me feel as though I’m still enjoying summer in the middle of winter. I did suggest to R that I might buy him a cider press for his birthday this year, so that he could add to the bounty by fermenting part of our large yield of apples – but strangely, he seems to think that he has enough to do as it is, without adding cider-making to his list!

The one thing about autumn which my mother did enjoy was creating arrangements of dried seed heads and grasses – christened by my father and thenceforth always known in our house as “dead stuff”. As you can see from this shot I’m no flower arranger, and I confess that I did get quite grumpy trying to persuade my stems into a reasonably-shaped display – but I find the final result quite satisfying and I’ve decided to keep it, for a while at least.

So there you are: preserves and dead stuff (and, I suppose grumpiness) – for me, the essence of autumn.