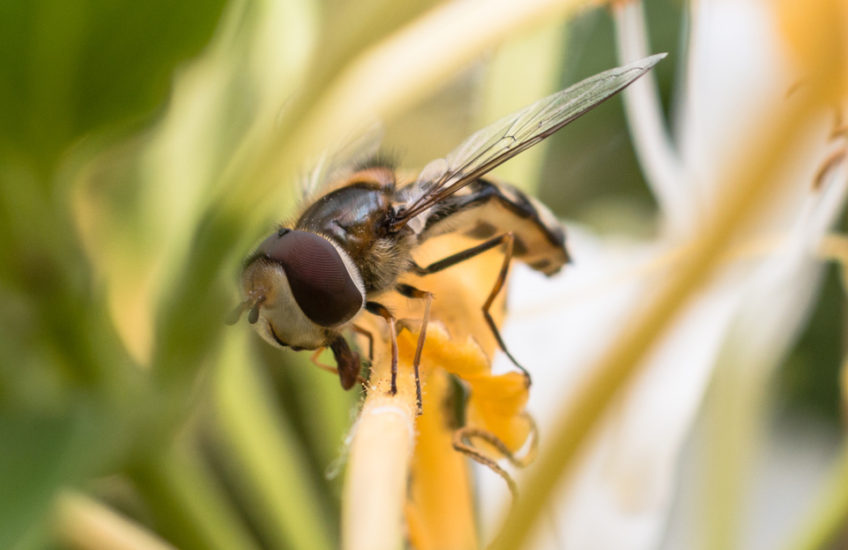 I didn’t know whether the main image here was going to display properly – I don’t normally ever crop in as much as I have here, but the focus caught this hoverfly’s head beautifully, even though we were both quite deep inside a cascade of honeysuckle when I took the shot, and I wanted to blow up the image enough to show the extraordinary eyes. If it had pixelated I would have swapped it for the extra, which shows the same insect. 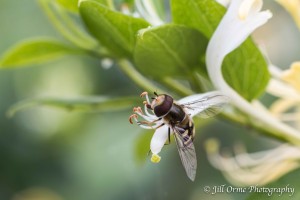 Scaeva pyrastri is an unusual hoverfly in being black and white, or at least black and cream. It’s a migrant from Europe, and isn’t thought to be able to survive the British winter. It feeds on nectar, and if it breeds while here the larvae will eat aphids. It’s about 1cm long, so roughly twice the size of a marmalade hoverfly, but moves quite quickly when out in the open.

The honeysuckle, by the way, is Lonicera similis delavayi – absolutely rampant at the moment, but smelling glorious and covered with all manner of insects today.

I just remembered – it’s wide-angle Wednesday tomorrow! Where does the week go? Anyhoo – the topic is People – I’m taking a broad view of the subject – but I’d like there to be a living creature in it please!