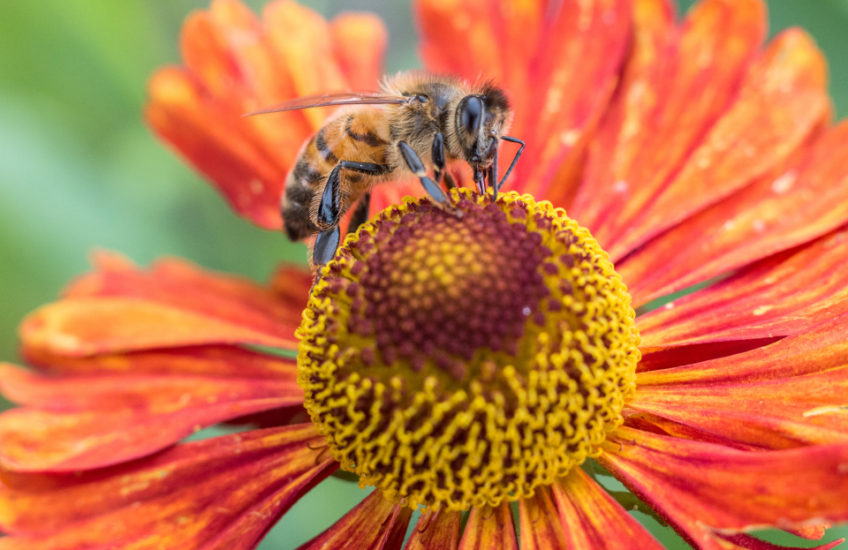 I had a good session stalking bugs this morning, using the nifty fifty with a 21mm extension tube. I photographed a hoverfly which I think was Eupeodes corollae (a first “capture” of that one, if my identification is correct), this honey bee and a mystery bug which I’ve put in as an extra.

The bee was quite irritable – probably not much liking the proximity of the camera, which was focusing from a distance of only around 14cm. I trusted that in the end it would be more interested in the helenium than in me, which turned out to be true, but it was skittish – so I was pretty pleased with the focus in this shot. I like the detail you can see in its mouth parts, as well as its hairy eyes and sweet little mohawk hair do.

The mystery bug is actually more interesting to me, because when I photographed it I had absolutely no idea what it was. It was the size of one of the smaller hoverflies, and moved like one – but when I brought it into focus I could see that the eyes and antennae were wrong for a hoverfly. I’ve put half a dozen more shots on Flickr, starting here, in the hope that a better entomologist than me (not a difficult thing to be!) might give me a definite I.D. on it. My own research has me describing it as a “possible sawfly” – in which case its babies are probably doing serious damage to one of my plants, because sawfly larvae are voracious eaters. Sawflies are related to bees, wasps and ants, but are themselves harmless to humans. Whatever it was, this creature was eating nectar via a tongue that seemed enormous in terms of its overall size: for scale, the centre of this aster flower is about 15mm across. 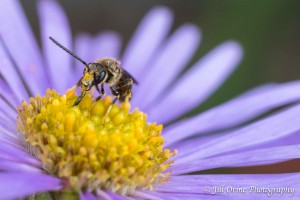 The two small black blobs on the top of the mystery creature’s head are two of its three ocelli (all three are visible in some of the Flickr shots). You can also make out one of the honey bee’s ocelli, between its compound eye and its mohawk. The ocelli are simple eyes, each with a wide-aperture lens and a photoreceptive surface; they’re more sensitive to light, but less capable of focusing a detailed image, than the compound eyes, and their exact function is unknown. There’s quite an interesting Wiki about them here.

I’m away to try for some sleep now, as we have to get Arthur to the vet early tomorrow for his surgery. See you on the other side….